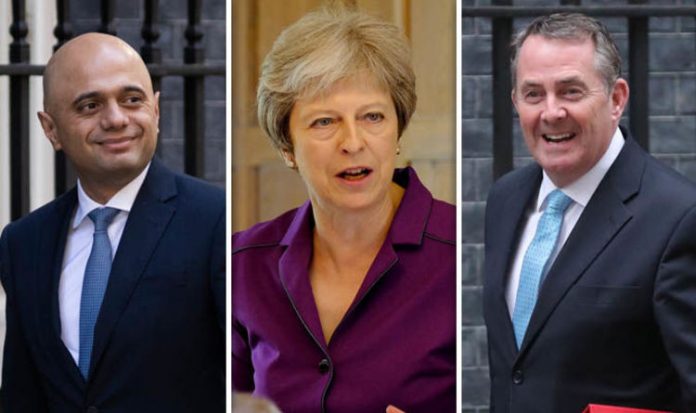 The Home Secretary and the International Trade Secretary are showing full support to the agreement reached by the Cabinet on Friday, despite a major backlash from fellow MPs and the public.

Taking a swipe at Brexiteers demanding to entirely cut ties with the European Union, Mr Javid and Mr Fox said: “Brexit has never been about turning our backs on Europe, pulling down the shutters and keeping ourselves to ourselves.”

The ministers believe the plan will allow the UK to “take back control” of laws, money and borders and protect British jobs, maintaining at the same time a good relationship with the bloc.

Mr Javid and Mr Fox told The Sun: “It will end freedom of movement, restore the supremacy of UK courts and stop us sending vast sums to Brussels each year, with a Brexit dividend worth billions for domestic priorities like our long-term NHS plan.”

The Chequers plan, which keeps the UK in line with the EU on rules for all goods, will also solve the Irish border dilemma, they say, as it doesn’t put an end date to the backstop plan and will see the UK keep abiding to EU rules.

Mr Javid and Mr Fox said: “Our UK-EU free trade area, with a commitment to maintaining a common rule book for goods and agricultural products, will mean frictionless trade, protecting jobs and honouring our commitments in Northern Ireland.

“And our business-friendly customs model enables the UK to secure trading opportunities around the world, meaning more and better jobs in places like the Midlands and the North.”

But the ministers argued Britain will be able to set its own trade tariffs and secure deals with other countries thanks to its seat at the World Trade Organisation (WTO).

They said: “Crucially, it will be elected MPs who decide whether UK laws and regulations should change, with consequences for market access if we choose a different approach from the EU.

“It will make Britain truly sovereign, while also allowing us to continue co-operating closely with our friends in Europe.”

Despite backing the Brexit plan, the ministers agreed the offer made to Brussels was “generous”.

They added: “It is a generous offer and, from one Union to another, we expect the EU to now show movement in their position too.”

And they defended also the strict collaboration the Chequers plan wants to keep on security between the UK and the EU.

Arguing a safe Europe equals to a safe Britain, Mr Javid and Fox said: “Under our plan, we will continue to participate in EU security agencies such as Europol and Eurojust.

“After we leave the EU we will be free to pursue a truly independent foreign policy but that does not mean we will isolate ourselves from our neighbours.

“Under our proposals, we will continue to consult and co-operate with our EU partners on global issues.”

They revealed the latest Brexit proposal could also see Britain keep using foreign aid alongside the EU ones.

The ministers said: “Our joint work on defence capability and space will continue.

“And we will decide where our armed forces and foreign aid could be used alongside the EU.”

Brexiteer Cabinet minister Michael Gove has urged Tory Eurosceptics to “get behind the Prime Minister”.

The agreement Mrs May secured at Chequers was not everything the Brexiteers wanted, Mr Gove acknowledged.

He added: “All those of us who believe that we want to execute a proper Brexit, and one that is the best deal for Britain, have an opportunity now to get behind the Prime Minister in order to negotiate that deal.”