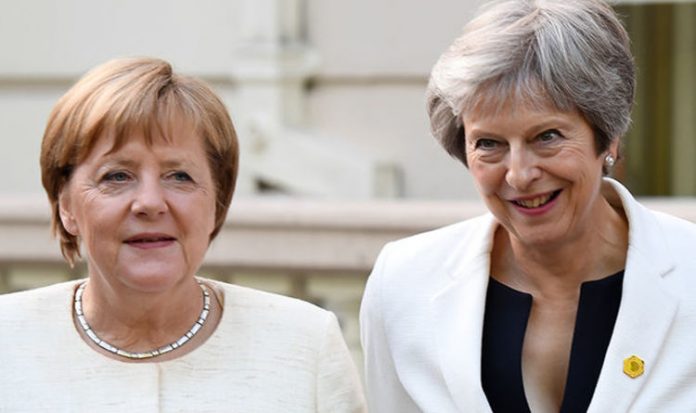 A row has erupted after the Prime Minister is alleged to have flew to Berlin to share her exit plan with Mrs Merkel before she revealed it to her Cabinet at her Chequers retreat in Buckinghamshire.

When quizzed over possible alterations to the Brexit blueprint, Mrs May is said to have made an extraordinary excuse saying: “No that’s not possible.

“Because I’ve already cleared the existing text with Mrs Merkel.”

Downing Street sources strongly refuted the claims but in the Spectator, journalist Charles Moore wrote: “At Chequers, I hear, one of her responses to suggested changes in her blueprint was to say, ‘No, that’s not possible, because I’ve already cleared it [the existing text] with Mrs Merkel’.”

Mrs May flew to Berlin last Thursday – the day before crunch talks at Chequers – to hold a meeting with Mrs Merkel.

Last night leading Tory Brexiteer Jacob Rees-Mogg said it would unconstitutional of the Prime Minister to discuss British policy with EU leaders before her own Cabinet.

Speaking on Sky News, he said: “I think they might have been taken to Brussels and to Berlin before they were presented at Chequers which is a serious question.

“And there’s another question about how they were drawn up because they were drawn up in secret without telling the Secretary of State for leaving the European Union David Davis what was going on, whilst his department was working on a White Paper.

“I don’t think it has been handled in a proper governmental system and in accordance with our constitutional norms.”

Mrs May is set to release the Brexit White Paper today which will lay out her intentions for a Brexit deal.

The terms were agreed at a tense Chequers meeting last Friday and led to the resignations of both the Brexit Secretary David Davis and the Foreign Secretary Boris Johnson.

Brexit will “end freedom of movement” and “take back control” of British laws according to new plans to be revealed today.