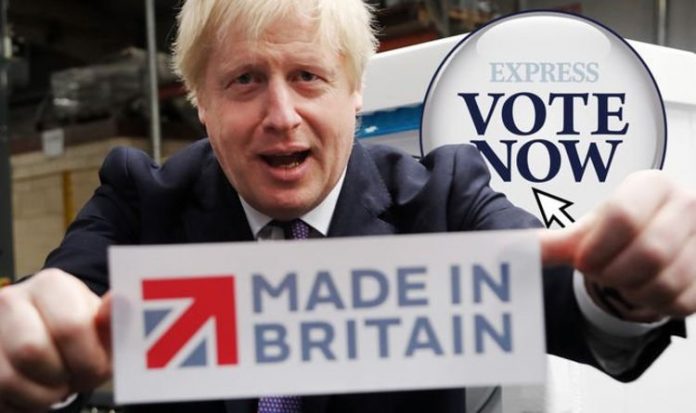 The Prime Minister has thrown his weight behind our Brilliant British campaign to prioritise UK-made products in the lead up to Christmas and claw back the nation left crippled by the coronavirus pandemic. Mr Johnson said the action aimed at delivering a boost to struggling British high streets and businesses across the country as they prepare to open their doors following the second COVID-19 lockdown was “fantastic”.

He said buying British would “put a spring in the step of the farmer who grew your sprouts, the kitchen table entrepreneur who stitched your son or daughter’s babygrow, the factory worker whose job is secure thanks to your custom”.

As part of the 15-day campaign, great offers, discounts, competitions and shopping ideas from British producers will be shared in the Daily Express and here at Express.co.uk.

Mr Johnson added: “It’s fantastic that the Daily Express is encouraging us all to spread that festive cheer around UK producers, growers, manufacturers and retailers by buying Brilliantly British this December.”

His rallying cry comes amid fears UK manufactures are struggling against competition from cheap imported goods.

But the coronavirus crisis has exposed Britain’s reliance on imports and it is hoped the production of critical goods will be bought back to the UK after Brexit.

As Brexit talks go down to the wire ahead of the end of the transition period on December 31, a no deal exit from the bloc is looking increasingly likely.

Mr Johnson has made it clear the UK would like a comprehensive Free Trade Agreement (FTA) with the bloc.

But the EU’s chief Brexit negotiator Michel Barnier has so far rejected the proposition and has insisted on a deal covering all aspects of the future relationship and not just trade.

The Brussels chief has been given a mandate by the EU27 member states to demand Britain follows a level playing field on trade with the EU, in order to protect the single market from being undercut in any future agreements.

The tariffs would increase the price of EU goods coming into the UK – therefore hitting the British consumer hardest in the pocket.

The news has prompted Brexiteers to call for Britons to become more patriotic in their consumer habits to ensure more money stays within the country and creates more opportunities in the UK.

Over the next two weeks, the Express will bring readers a superb selection of the best of British producers including high-street retailers and tiny independent boutiques.

Some are iconic brands, renowned throughout the world – such as Jaguar Land Rover and designer handbag retailer Mulberry – but the work of small craftsmen and women who can afford only to sell online will also be celebrated.