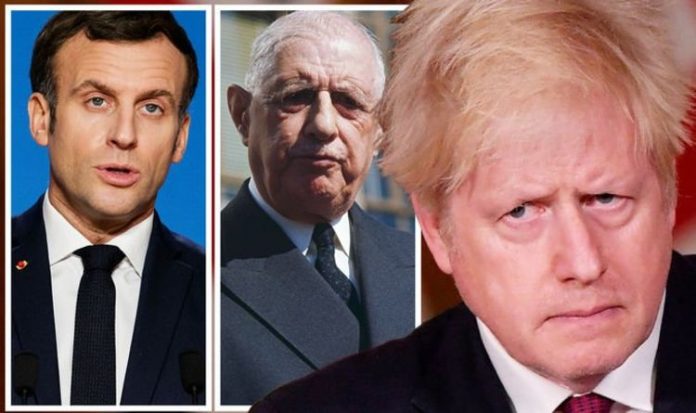 Prime Minister Boris Johnson is at loggerheads with French President Emmanuel Macron as he attempts to present himself as a modern-day Napoleon or Charles de Gaulle in his Brexit stubbornness. France has even threatened to veto a deal over fisheries, sparking anger from some in the UK and causing division in the EU. Now, Brussels bureaucrat Philippe Lamberts has added fuel to the fire, claiming France never wanted the UK to join the bloc in 1973 and that figures in Paris rejoiced at the news of Britain’s Leave vote in 2016.

The Co-President of the European Greens told Express.co.uk: “First don’t forget there was also resistance from the UK’s traditional rival France to joining the EU.

“And which is the country that rubbed its collective hands with Brexit? “It was France again.”

The 57-year-old Belgian, who claimed to dislike French nationalists as much as English nationalists, was referring to the UK’s far from seamless route into the EEC ‒ the precursor to the EU.

It was only after his death that the green light was given to negotiations for British membership, with talks starting in 1970.

The UK joined the EEC on January 1, 1973, alongside Denmark and Ireland.

In his second refusal, General de Gaulle accused Britain of a “deep-seated hostility” towards the European project.

He said London showed a “lack of interest” and would require a “radical transformation” before joining the EEC.

He added in a statement: “The present Common Market is incompatible with the economy, as it now stands, of Britain.

“Compared with the motives that led the six [founder nations] to organise their unit, we understand for what reasons, why Britain – who is not continental, who remains, because of the Commonwealth and because she is an island, committed far beyond the seas, who is tied to the United States by all kinds of special agreements – did not merge into a Community with set dimensions and set rules.”

“Britain nourishes herself, to a great extent, on food-stuffs bought inexpensively throughout the world and, particularly, in the Commonwealth.

“If she submits to the rules of the six, then her balance of payments will be crushed by ‘levies’ and, on the other hand, she would then be forced to raise the price of her food to the price level adopted by the continental countries, consequently to increase the wages of her workers and, thereby, to sell her goods all the more at a higher price and with more difficulty.”

Former MEP Daniel Hannan believes General de Gaulle was onto something then that many in Britain failed to see, arguing that the Frenchman understood the UK better than he is given credit for.

He told Express.co.uk: “First he wanted France to be the dominant force within the EEC and I think that’s hard to argue with.

“But the second and more subtle argument is one he is rarely given credit for ‒ he in some ways understood Britain better than its own leaders of that era did.

“He made a speech explaining one of his vetoes when he said Britain has always been a maritime country.

“Lengthy supply lines, its trading patterns means it will never comfortably assimilated into a continental block

“I think that’s true and it never ceased to be true.

“Britain is a semi-European country in a way that I think the other members struggle to understand.”

Despite some difficult moments in recent decades, France and the UK still have a strong relationship economically.

So much so, many in France have warned of the impact a no deal Brexit could have on the country.

Christiane Lambert of the FNSEA union said French wine and spirits producers would be hit hardest, as their sector had a £1.1billion (€1.2bn) annual surplus in trade with the UK.

France is one of many EU member states where fishermen regularly fish in UK waters.

Mr Lamberts, who is a member of the European Parliament’s Brexit Steering Group, also believes that the UK has never fully been invested in the European project.

The MEP said that the UK’s imperial history has also contributed to its aloof position in Europe.

He added: “It is true that geographically the UK is an island, which is a different situation.

“And of course the UK has a different history.

“The history of the involvement of the UK in European affairs has always been a history of avoiding at all costs that any single power would dominate the continent while not really being a part of the group of nations.”