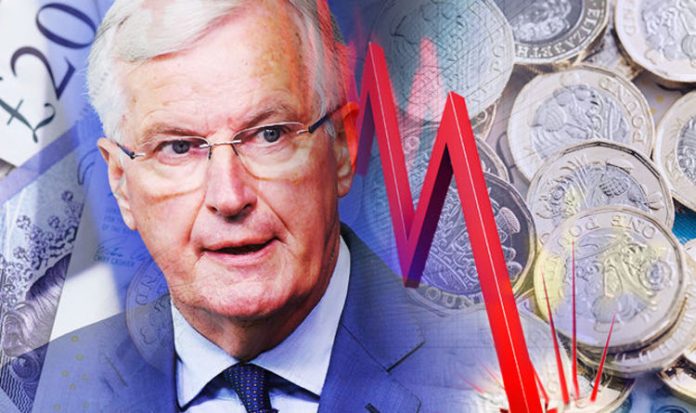 After two weeks of improvements as Brexit negotiations enter a crucial stage, pound sterling fell 0.3 percent in early morning trading to $1.2928 against the US dollar.

This comes after the EU’s chief Brexit negotiator Mr Barnier said he was “strongly opposed” to key parts of Theresa May’s proposals for a post-withdrawal trade deal, warning Britain can’t “cherry pick” which Brussels regulations it wants to adopt on exiting the bloc.

He told German newspaper Frankfurter Allgemeine Zeitung that the British “have a choice”.

Mr Barnier said: “We have a coherent market for goods, services, capital and people – our own ecosystem that has grown over decades. You cannot play with it by picking pieces.

“There is another reason why I strongly oppose the British proposal. There are services in every product. In your mobile phone, for example, it is 20 to 40 percent of the total value.”

The chief Brexit negotiator also told EU car manufacturers they would have to use fewer British parts after Brexit in order to follow tariff export rules.

But Mrs May has remained defiant on her Chequers proposals and said she would not allow compromises to her Brexit strategy that went against the national interest.

She wrote in the Sunday Telegraph: “I will not be pushed into accepting compromises on the Chequers proposals that are not in our national interest.

“The coming months will be critical in shaping the future of our country and I am clear about my mission.”

The Prime Minister’s Chequers plan, revealed in July, triggered the resignations of Foreign Secretary Boris Johnson and Brexit Secretary David Davis, both of whom have launched scathing attacks on her proposals since.

Mr Johnson claimed it gives the UK “two thirds of diddly squat” and the “inevitable outcome” if negotiations continue as they are is a “victory for the EU”.

He wrote in his column in the Daily Telegraph on Monday: “In adopting the Chequers proposals, we have gone into battle with the white flag fluttering over our leading tank.

“If we continue on this basis we will throw away most of the advantages of Brexit.

“By agreeing to a “common rulebook” with the EU, we are making it impossible for the UK to be more competitive and we are ruling out major free trade deals.

“We will remain in the EU taxi; but this time locked in the boot, with absolutely no say on the destination.

“We won’t have taken back control, we will have lost control.”

Mr Davis also piled pressure on Mrs May to abandon her Chequers plan, warning it is almost “worse than being in the EU”.

He poured scorn on her claim that she would not be forced into accepting compromises on the Chequers proposals that are not in our national interest, as that risked becoming “an incredible ‘open sesame’ to all”.

Speaking on the BBC’s Andrew Marr Show, Mr Davis said: “In my view, the Chequers proposal is actually almost worse than being in the EU.

“We will be under the rule of the EU with respect to all of our manufactured goods and agri-foods – that’s a really serious concession.

“What about ‘Take back control, it doesn’t work?’.

“That actually leaves us in a position where they dictate our future rules without us having a say at all, so it’s a worse deal.”