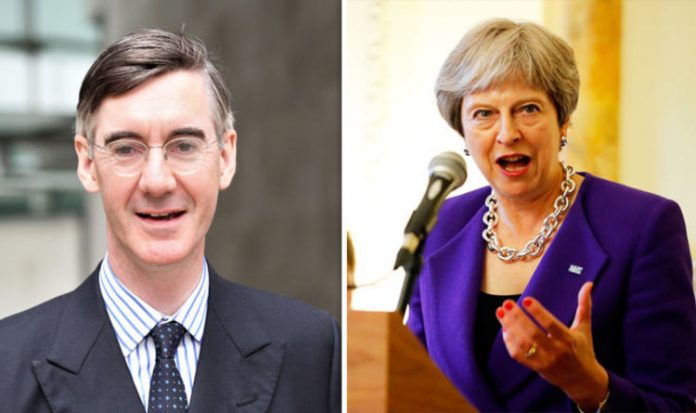 The Prime Minister is trying to find a compromise that will secure support from both wings of her Cabinet at a meeting at Chequers on Friday.

But Eurosceptic Tories today called for Mrs May to maintain her red lines on leaving the single market and customs union.

A group of more than 40 Eurosceptic Tories met chief whip Julian Smith to air their concerns about the prospect of a soft Brexit.

Such a move would be highly controversial because it would stop Britain being free to strike its own global trade deals.

Influential backbencher Jacob Rees-Mogg admitted he was worried about the outcome of Friday’s Cabinet meeting at Chequers.

He said: “I won’t be reassured until I know the details of what comes out on Friday, one way or the other.

“The chief whip was listening to our concerns, but he’s not a policy-maker so it’s not for him to set out policy.”

Mr Rees-Mogg also warned the Prime Minister to oppose any continued alignment with the EU on rules for goods and tariffs.

He said: “It’s very important that we are not in regulatory alignment, because we will need to do trade deals with other countries.

“This would be a serious mistake. It’s hard to think of a worse idea.”

Mrs May attempted to address her MPs’ fears at Prime Minister’s Questions by insisting the UK would quit the single market and customs union.

She added that her Government would “bring an end to free movement” and “take control of our borders”.

The meeting with the chief whip was used by the Eurosceptic MPs to spell out their demands for the forthcoming Brexit white paper.

Led by Mr Rees-Mogg, they stressed that there must be no watering down of the position set out in the Tory election manifesto.

There was also widespread concern among the MPs about the role being played by Olly Robbins, Theresa May’s Europe adviser, in Brexit talks.

And there were demands for a greater emphasis to be placed on preparing for a “no deal” Brexit.

Brexiteer Cabinet minister Michael Gove insisted that a “united position” would be reached at the Cabinet away day at Chequers.

The Environment Secretary said: “Everyone in Cabinet is an advocate for Brexit, that is Government policy.

“What we are going to do is to make sure that we have a discussion which ensures that we have the right policy for the UK.”