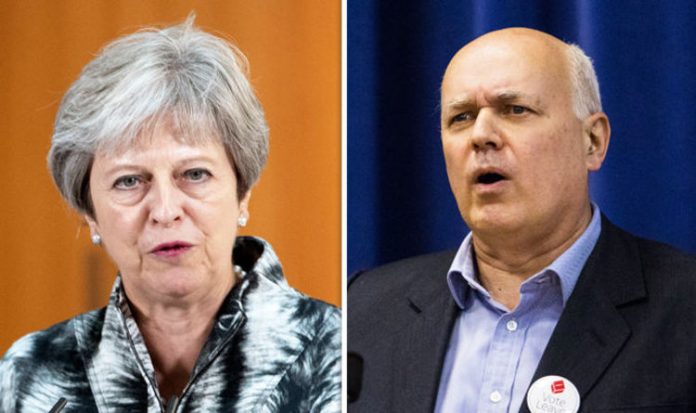 The group, named #StandUp4Brexit, is urging the Prime Minister to scrap the controversial Brexit plan agreed by the Cabinet in July.

Campaign supporters want Mrs May to deliver a clean break from Brussels, as promised in last year’s Conservative election manifesto.

They argue that the Chequers plan would keep the UK tied to Brussels and make it difficult for Britain to strike overseas trade deals.

Mrs May’s proposal is also hugely controversial because it could force the UK to accept rulings from the European Court of Justice (ECJ).

Tory activist Rebecca Ryan, who helped set up the grassroots campaign, said it was crucial that Mrs May ditches the Chequers agreement.

She told Express.co.uk: “There was an immediate sense of shock and betrayal when the Chequers deal was announced.

“The Prime Minister U-turned on what she promised in the election manifesto and in her Lancaster House speech in January.

“Lots of people who have lent their support to the Conservative Party feel angry that they aren’t being listened to.

“We believe all of her red lines have been crossed.

“Her plans to agree a ‘common rulebook’ with the EU would hamper Britain’s ability to strike ambitious global trade deals.”

Ms Ryan also attacked the Prime Minister for “surrounding herself” with Remainers, including Chancellor Philip Hammond.

She said: “Everyone’s at their wit’s end with Hammond – he seems to be a complete liability. He’s not a team player, that’s for sure.

“The Cabinet is full of Remainers. There are a few Brexiteers left in there, but they are very much following Theresa May’s lead.”

Mr Hammond has repeatedly angered Brexiteers by issuing a string of doom-mongering forecasts about the financial impact of leaving the EU.

Earlier this week he claimed GDP could plunge if Britain resorted to trading on World Trade Organisation (WTO) terms.

Mrs May was quick to rebuke the Chancellor’s comment, saying: “Look at what the director of the World Trade Organisation has said.

“He said about a no-deal situation that it would not be a walk in the park, but it wouldn’t be the end of the world.”

A senior ally of ex-Brexit Secretary David Davis yesterday claimed Mrs May was being given space to dump the Chequers deal by the EU.

He told BBC Radio 4’s Today programme: “The difficulty for Chequers is it has not really got any friends.

“For the EU, it’s outside their core principles and undermines the integrity of the single market. In the UK, people believe it is Brexit in name only.”