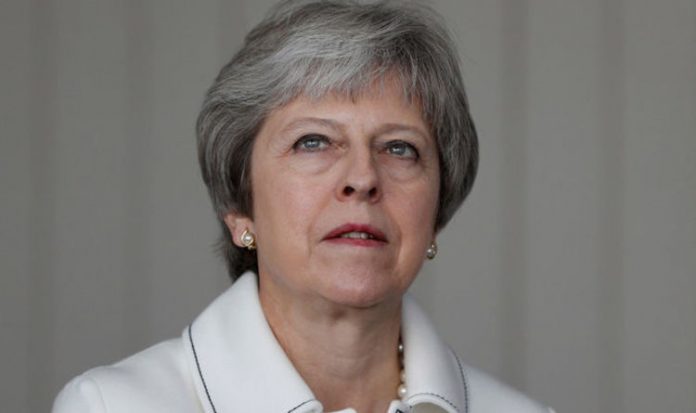 Ahead of tomorrow’s Cabinet retreat, at which Mrs May will reveal her ‘third option’ EU customs partnership proposal, Dr Radomir Tylecote urged the Prime Minister to stand strong.

The Senior Research Analyst in the International Trade and Competition Unit of the Institute of Economic Affairs think tank also warned any kind of regulatory alignment with the bloc will doom hopes of “serious trade deals” with third party states.

Details of her proposals have not yet been revealed and Dr Tylecote believes it is “vital” for Mrs May to bring new ideas to the table, rather than anything resembling a rehashed version of the customs partnership plan which is anathema to Brexiteers.

And he urged her not to water her plans down to suit Brussels.

He explained: “We need to get out of the habit of worrying about every complaint from the EU about a UK proposal.

“It is incredibly important that we stop negotiating by accepting a dismissal of an opening bid.

“Parties do that. It’s called negotiation.

“We need to buck up and negotiate back, not accept every EU complaint as if it were holy gospel.

“There are certain things the UK will have to simply insist on.

The opportunity before us vastly outweighs any hindrances the EU could seriously put up.

“The possible customs costs are tiny compared to the huge gains awaiting us in the world through independent trade and the chance to run our own economy again.

“And we’ve been told this by our allies – the Kiwis, Australians, Canadians, and the US – if we stay in any kind of customs or regulatory harmonisation, we can forget serious trade deals with them.”

The summit at Chequers, the Prime Minister’s country residence, is aimed at fixing the Government’s position on key areas of the trade deal it wants with Brussels, which originally involved two proposals.

The second, known as maximum facilitation, or max fac for short, would aim to create a “frictionless” customs border between the UK and the EU, using technological solutions to replace physical border checks.

The two ideas have split the Cabinet and received a lukewarm reception in Brussels.