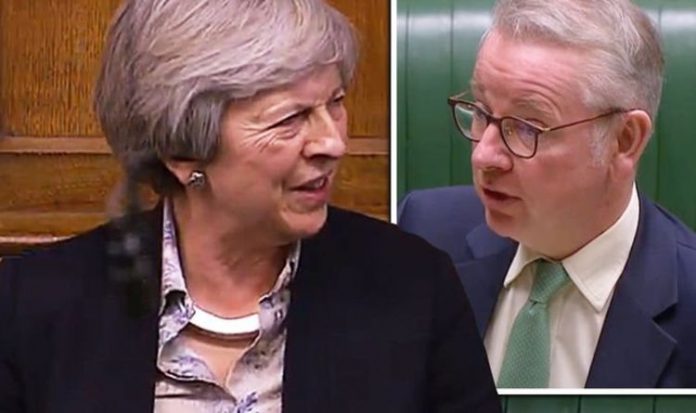 Speaking in the Commons this afternoon, the former prime minister expressed her concern over the state of the UK’s security apparatus particularly in the event of no deal Brexit. She claimed neither Mr Gove, nor Boris Johnson had so far made reference to the matter amid the backdrop of the current talks. Despite her concern, Mr Gove dismantled her critique with a brutal three-point response.

“I note that neither you made reference to security today and nor did the Prime Minister to MPs on October 16.

“So will my right honourable friend confirm, if the UK leaves without a deal, the UK will no longer have access to crucial databases in order to catch criminals and terrorists?”

In response, Mr Gove insisted by having access to those databases and system post-Brexit, it would mean the UK would still be bound to EU law and regulations.

He also claimed significant progress had been made over the cooperation of the UK and EU on security.

Mr Gove added: “There are many areas where we can cooperate more effectively to safeguard our borders outside of the EU than we could inside through a variety of methods open to us.

“We can intensify the security we give to the British people.”

Lastly, in a jibe to the former Prime Minister, Mr Gove quoted her own slogan that “no deal was better than a bad deal”.

“Such talks would be meaningless and would take us no nearer to finding a workable solution.”

Despite a breakdown in talks following the EU summit last Friday, Mr Barnier has declared his openness to carrying on talks to agree on a deal.

He also declared the EU was prepared to discuss a wide range of issues surrounding negotiations and indicated the two sides could discuss legal texts.

Prior to Mr Barnier’s statement, the Cabinet Office Minister said the door was open “ajar” for a deal to be struck if the EU drops some of its demands.