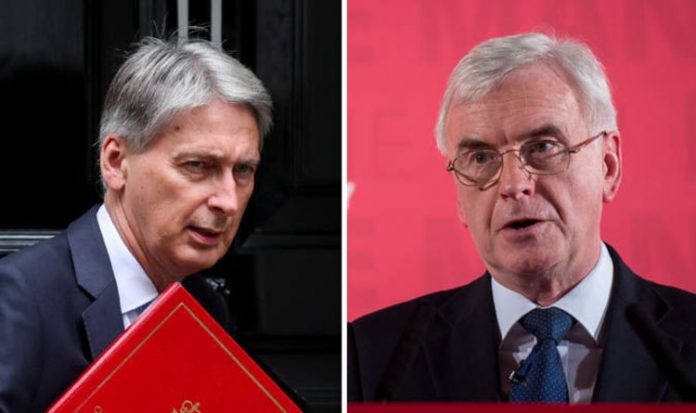 The Chancellor insisted officials and ministers will be “working flat out” over the coming weeks to achieve an agreement with the European Union as he seized the moment to mock his Labour counterpart John McDonnell after the shadow chancellor stumbled over Prime Minister Theresa May’s “no deal is better than a bad deal” mantra during Treasury questions.

“I’ll negotiate that again, Mr Speaker. She continues to insist a bad deal is better than no deal.

“Business organisations are clear – the CBI’s warning of a catastrophe, the National Farmers Union said it’d be an Armageddon scenario, and according to the TUC a no-deal Brexit would be devastating for working people.

“So can I appeal to the Chancellor, he knows the consequences of no deal. Will he now show some leadership and make it clear to his colleagues that he will not accept a no-deal scenario?”

To laughter, Mr Hammond replied: “First of all I’d love to actually know what it said on his bit of paper.

“He’s absolutely right that time is running out. We’re working against the clock, we understand that, and we will be working flat out over the coming weeks and months to achieve that.”

Mr Hammond last month was criticised by Tory MPs for reiterating warnings over a no-deal Brexit having “large fiscal consequences”.

He pointed to disputed provisional analysis, released earlier this year, which claimed GDP could fall and borrowing could be around £80 billion a year higher by 2033/34 under a scenario in which Britain resorted to World Trade Organisation (WTO) terms due to no agreement with the EU.

Mr McDonnell earlier highlighted these warnings as he criticised the “mixed messages” emerging from Cabinet ministers.

He said: “The Chancellor has a critical role to play and bring some rationality to this debate. The Treasury has calculated that no deal could result in the UK’s GDP being more than 10% smaller.

“Will he outline and be absolutely clear to some of his colleagues today what that would mean for jobs, for wages, investment and living standards?”

Mr Hammond replied: “There’s no ambiguity at all about the Government’s objective – it wants to strike a deal with the European Union based on the white paper that we have published, which we believe will be good for Britain and good for the European Union, and we’re devoting all our efforts over the coming weeks and months to secure that deal and protecting the British economy.”