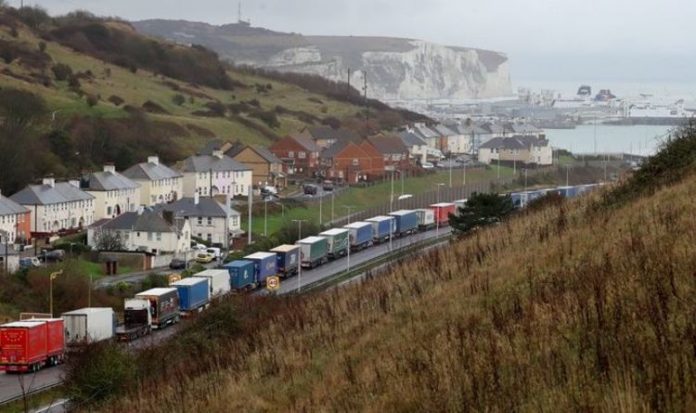 The CBI, which represents 190,000 businesses, is also asking Brussels to give UK companies more time to comply with the new paperwork required from January 1 when the Brexit transition period expires. Britain leaves the single market and customs union in less than a fortnight but business leaders say they have no idea what the future trading relationship with Brussels will look like and fear widespread disruption in the New Year as a result of the lack of clarity.

A CBI spokesman said: “With time so short, both sides need to take steps to minimise disruption no matter the outcome.

“Without them, much of the progress made recovering from the pandemic will be lost.”

Even if the two sides manage to thrash out an 11th-hour post-Brexit trade deal, British exporters will still have to prove the origin of their goods to benefit from tariff-free trade and the CBI said companies should be given a one-year grace period to meet this requirement.

The organisation is also urging a 12-month period which would allow UK products certified in Britain to be sold in the EU.

The Government has consistently ruled out extending the Brexit transition period but has taken steps to try to minimise the upheaval firms face such as phasing-in post-Brexit import procedures over six months.

Cabinet Office Minister Michael Gove has told MPs the Government wanted to ensure a “smooth glide path for businesses” as the transition period comes to an end.

But ministers have warned queues of up to 7,000 could form around ports in a reasonable worst-case scenario because businesses have failed to properly prepared, threatening food supplies and causing massive disruption for just-in-time deliveries.

Schools Minister Nick Gibb said the Government was “working around the clock” to secure a post-Brexit trade deal as last-ditch talks continue between London and Brussels.

Mr Gibb told Times Radio: “The Prime Minister says that we are in a very serious situation.

“We will test every route to getting a free trade agreement before the end of the year.

“But we can’t do so at the expense of our sovereignty. We cannot be the only nation in the world that doesn’t have control of its own seas, its own fisheries.

“So, we will work very hard. The Government is working around the clock to get a trade deal, but not at the expense of this country’s independence.”

Mr Barnier continued: “It’s also obvious that this isn’t an agreement we will sign at any price or any cost.

“I think I’ve always been frank with you and open and sincere.

“I cannot say what will come during this last home straight of negotiations. We have to be prepared for all eventualities.”