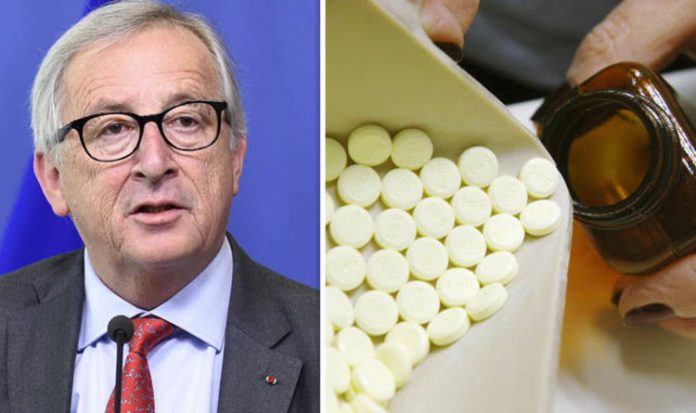 The EU27 are far behind the UK in their preparation for a no-deal Brexit, especially in their drugs stockpiles, according to Mike Thompson, chief executive of the Association of the British Pharmaceutical Industry (ABPI).

Mr Thompson told Politico the UK government has worked together with drug firms to stockpile medicines, as confirmed last month to the House of Commons by the UK’s health and social care secretary, Matt Hancock.

But he confessed he is “concerned about patients across the continent of Europe”, as they are falling behind their preparations for a no-deal Brexit, especially in the health sector.

Mr Thompson also urged the EU and the UK to thrash out a deal that will mutually recognise each other’s drug quality control testing procedures.

This move would spare firms on both side of the English Channel multi-million pound costs in setting up duplicate testing operations.

He said: “We [the ABPI] have kept quiet for a long period of time, but we are now only a number of months before potentially these things becoming reality, and there comes a time where you have to put the negotiation to one side and think about what is the impact on patients here, and you need to do something.”

Mr Thompson highlights the importance for all the members of the EU to share their central databases with the UK.

Through these current systems, the EU28 can be immediately alerted about the dangers of a potential treatment and warned if a pathogen breaks out.

And Britain has been hugely important in launching alerts through the drug database within the last years, sharing 38 percent of the total warnings, Mr Thompson said.

The ABPI chief explained an agreement focused on sharing this information can be life-saving.

He added: “If you think about the number of patients that arrive in Europe through Heathrow, for the UK and Europe not to be working on one infectious disease database, [that] will not be understood by patients.

“So there are some really simple things that we would expect now to be very quickly agreed and put in place, otherwise we’re going to be putting patients at risk.”

As odds for a no-deal Brexit grow, firms around the EU and UK are starting to stockpile products fearing a disruption in the trades in the aftermath of March 2019.

But Britain is in a much better position than the EU27.

Mr Thompson said: “Understandably, Brexit is higher up the government’s agenda in the UK than it is in other member states, therefore the UK has been moving at a faster pace in terms of thinking through some of the issues.

“You see now government ministers in the UK actively discuss things like stockpiling, which you’re yet to see across other member states.”

A UK Department of Health and Social Care spokesperson confirmed the necessity to strike a deal that will guarantee the least disruption to the NHS.

They said: “We have continued to work closely with the European Union to ensure there is no disruption to the NHS after we leave.

“Alongside that, we are continuing to work with industry in the unlikely event of a no-deal Brexit so patients continue to receive top quality care.”

A European Commission spokesperson said: “Discussions on the framework of the future EU-UK relationship are ongoing.”