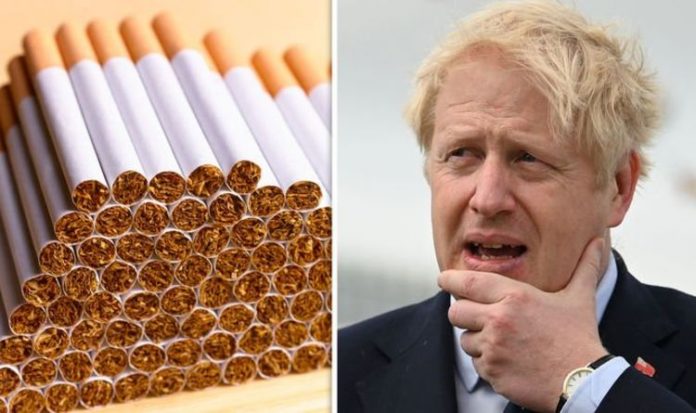 Pieter Cleppe was speaking after customs officials in Latvia said they had confiscated double the amount of illegal cigarettes crossing the border into the bloc from Belarus last year compared with 2019. And he said there were also big implications for the UK, citing a raid on an illegal factory in Belgium in December which netted a haul of 4.5 million cigarettes ready to be smuggled across the Channel.

“Now that new bureaucracy has been imposed on EU-UK trade following Brexit, the difference between trading goods legally or illegally has increased a lot.

“This means greater opportunities for profit for organised crime groups, something they will most certainly exploit

“Especially when it comes to products that are taxed more in the UK than the EU, as for example cigarettes.”

Mr Cleppe urged the Government to lower tax rates on cigarettes and other products vulnerable to smuggling and cut customs and other bureaucracy on trading such products to help counter the problem, stressing Brexit should make it easier to do so.

He explained: “There now is extra red tape as a result of the EU-UK trade deal.

“But even without a follow-up deal, the UK could unilaterally alleviate bureaucracy for businesses.

“For example by making sure there are only digital forms to be filled in, which is not the case yet.”

Speaking last week, Taivo Hanzens, Latvia’s deputy head of customs, said: “We confiscated 21 million illegal cigarettes from Belarus in 2020 in this border sector alone, which is double the amount for 2019.”

Since 2000, the UK has had a strategy in place to tackle tobacco smuggling which has achieved significant reductions in the size of the illicit market.

Between 2017 and 2019, more than 2.8 billion illicit cigarettes and in excess of 439 tonnes of hand-rolling tobacco were seized by UK customs officials.

HMRC has introduced new schemes to provide further controls on the tobacco supply chain and add further powers to challenge illicit production in the UK.

Measures include the Raw Tobacco Approval Scheme in 2017, the Tobacco Products Manufacturing Machinery Licensing Scheme in August 2018 and Tobacco Track & Trace Scheme in May 2019.

An HMRC spokesperson said: “HMRC continues to work closely with other enforcement agencies in the UK and overseas, taking an intelligence-based approach to disrupt and deter those involved illegal tobacco.

“The sale of illegal tobacco will not be tolerated by us or our partner agencies.

“Disrupting criminal trade is at the heart of our strategy to clampdown on the illicit tobacco market, which costs the UK around £1.9 billion a year.

“This is theft from the taxpayer and undermines legitimate traders.”

Anyone with information regarding tobacco fraud is encouraged to report it online or call the Fraud Hotline on 0800 788 887.