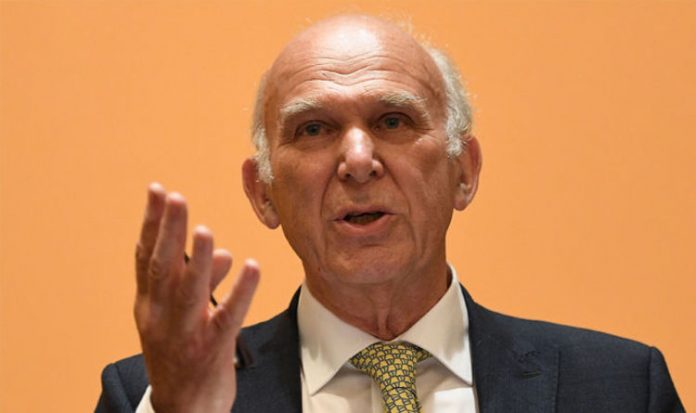 He also called for a judge presiding over the campaign to prevent “aggro” and “all the lies of 2016” being repeated.

The Liberal Democrat leader said kids aged 16 and 17 should be allowed to vote in any second referendum on EU membership.

Speaking at a People’s Vote rally in Newcastle, Mr Cable said Brexit was “imposed on young people to the loss of their futures”.

He also called for an “adjudicator” to stop “all the lies of 2016” during the campaigning.

Mr Cable said: “Some say a People’s Vote would cause aggro, all the lies of 2016 would be repeated. We need to anticipate that.

“We need an adjudicator who can look at what campaigners say and fact check them properly.

“Brexit has been imposed on young people to the loss of their futures.

“What I want to see when we have this People’s Vote is that 16 and 17-year-olds are allowed to take part.”

Neither of the two main parties have officially backed a second referendum.

This is despite MPs across the spectrum joining with the Liberal Democrats to call for a second poll on the final Brexit deal.

Labour’s Barry Gardiner warned of civil disobedience and social disruption in the event of a second EU referendum.

He added that the 2016 vote should be respected, despite supporting remain himself.

But Labour has hinted that it could still potentially support a second referendum.

Labour Brexit Secretary Keir Starmer said “all options are on the table” should Theresa May fail to have her Brexit deal passed in Parliament.

John McDonnell has sided with the shadow Brexit secretary adding that Labour were “not taking any options off the table” when the deal returns to Parliament.

Speaking on BBC Radio 4’s Today programme, presenter Kamal Ahmed said: “Could you just clear up something for us. Your view of the possibility of a second referendum or what is called a People’s Vote?

“We have had Barry Gardiner your shadow international trade secretary saying that having such a second vote would lead to civil disobedience and was undemocratic.

“You have had the shadow Brexit secretary Sir Keir Starmer suggesting that it should be on the table. What is the official policy of the Labour Party on this second vote issue.”

Mr McDonnell ruled out a second referendum before claiming Labour were not “taking options off the table” when the Government returns to Parliament with the Brexit agreement.

He said: “First of all, it is not Labour Party policy to have another referendum, that’s it, we respect the past referendum.

“But, we recognise that when the Government comes forward with its proposals, if it does, I’m worried that we might be in a no-deal situation.

“But, when the Government comes forward with its proposals Parliament will decide the next step.

“We are not taking any options off the table when that debate happens.

“My own view is actually I have said consistently, the Labour Party is not opposed to any form of democratic engagement, I would prefer a general election.”