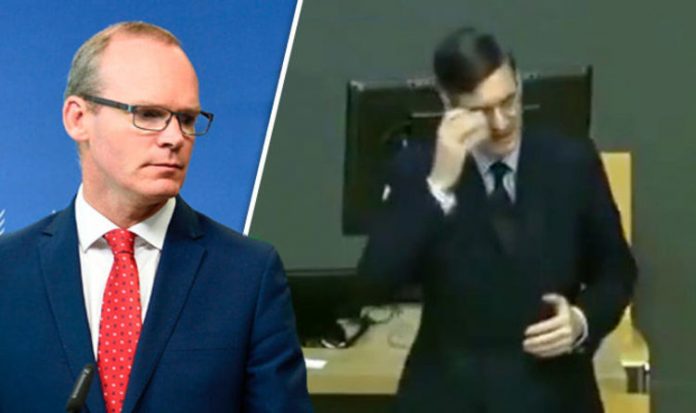 The video shows Jacob Rees-Mogg advocating for inspections on people crossing the Irish border. While shared widely on social media over the past day, it appears to have been recorded in the run-up to the 2016 Brexit referendum.

The Irish border, which zig-zags for more than 300 miles across the north-east of Ireland and is crossed by 200 public roads, has been the biggest issue facing Britain as it leaves the EU.

During the Troubles, the period of civil unrest in Ireland during the late-20th century, major border crossings were blocked by British Army checkpoints, with some smaller routes closed completely.

Fears of a return to a hard border and a return to bloodshed have grown since England and Wales voted to leave the EU in June 2016. Northern Ireland, like Scotland, voted heavily in favour of Remain.

The UK government remains unable to explain how cross-border trade and the movement of goods will continue after Brexit without the establishment of customs checkpoints or even CCTV cameras – which would constitute a hard border, a red line issue for Dublin, Belfast and Brussels.

And while Prime Minister Theresa May has repeatedly promised to avoid a return to a hard-border, the newly-emerged video shared widely on social media today shows Mr Rees-Mogg calling for physical inspections.

He said the style of border checks in place “during the Troubles” could be brought back, before dismissing the border itself as not something “everyone has to go through every day”.

In reality, any sort of physical check would be deemed unacceptable in Brussels and among politicians on both sides of the Irish border, which is crossed daily by 30,000 workers.

But Mr Rees-Mogg claimed: “It is perfectly possible to continue with historic arrangements to ensure that there wasn’t a great loophole in the way people could get into the UK, which would leave us in just as bad a position as we are currently in.

“There would be our ability, as we had during the Troubles, to have people inspected.

“It’s not a border that everyone has to go through every day.

“Of course for security reasons during the Troubles we kept a very close eye on the border to try and stop gun-running and things like that.

“It’s not inconsistent to have a border that people can pass through but that you are keeping an eye on.”

Mr Coveney, who is also the country’s foreign minister, Tweeted a link to the video this afternoon.

He added: “It’s hard to believe that a senior politician is so ill informed about Ireland and the politics of the Brexit Irish border issue that he could make comments like these.

“We have left the Troubles behind us, through the sincere efforts of many and we intend on keeping it that way.”