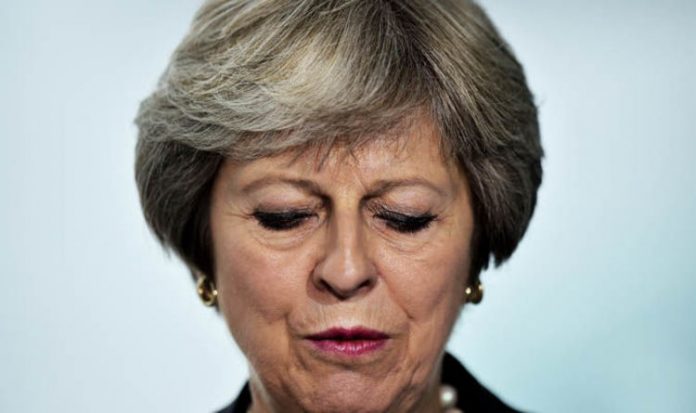 The deepening political crisis comes after Mrs May unveiled her plans for Brexit at Chequers, a proposal which deeply divided her cabinet.

Two high-profile resignations followed, that of Foreign Secretary Boris Johnson and Brexit Secretary David Davis, increasing concerns over the state of the party.

Reports that about 40 Tory MPs have submitted letters of no-confidence in the Prime Minister prompted fears of an imminent leadership battle.

This latest poll, conducted for the Sunday Times, shows ministers are not the only ones concerned – the public is less certain than ever that the government is delivering on the result of the EU referendum.

What do the polls show?

The survey, which will spark deep unease in Downing Street, highlights how growing numbers are becoming alienated from the ruling party.

The main outcomes of the YouGov poll, in which 1,668 adults were questioned between July 19 – 20:

READ  What will happen to Commonwealth when the Queen dies? | Royal | News (Reports)

If this materialises, it will make it impossible for the Tories to win the next general election.

It has also been revealed that Liberal Democrat leader, Sir Vince Cable, is in talks to set up a new centrist party.

And Steve Bannon, Donald Trump’s former chief strategist, told the Sunday Times he was planning on raising movement to set up a right-wing “mass movement” to rival Momentum on the left.

The only nugget of good news for Mrs May from the poll is that Tory voters still think she should fight on by a margin of 58 percent to 32 percent.

While Mrs May’s Brexit proposal has been met with scorn, there is equal concern over leaving the EU with no deal come March 2019.

The poll shows that if another referendum was held, they would overturn the referendum result, with remaining in the EU beating leaving with no deal by 54 percent to 46 percent.

In his resignation speech, Mr Johnson said: “It is absolute nonsense to imagine, as I fear some of my colleagues do, that we can somehow afford to make a botched treaty now and then break and reset the bone later on,” he said.

“We have seen even in these talks how the supposedly provisional becomes eternal.”

However he added: “It’s not too late to save Brexit.”