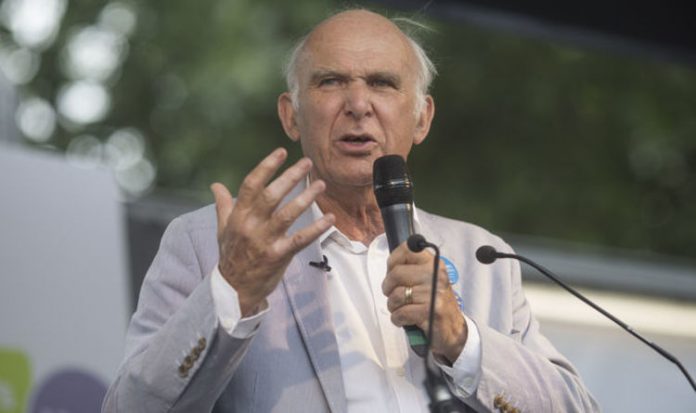 Both Sir Cable and the former Liberal Democrats’ leader Tim Farron, missed the crunch ballot, which saw Theresa May’s Brexit plan pass by a tiny majority in the House of Commons.

Sir Vince has since apologised and said it was the “wrong call” for him to miss the vote and instead attend a “confidential political meeting somewhere else”.

However, The Sunday Times has revealed that the MP for Twickenham was attending a dinner to discuss the possibility for a new anti-Brexit party.

A source told The Sunday Times:  “Sir Vince recognises that the centre ground has been all but abandoned by the two mainstream parties and was interested in exploring the idea of a new party.

“He is not implacably opposed to the idea but wanted to be reassured it will actually get off the ground.”

The comments come after an interview with Business Insider on Friday, in which Sir Cable marked his first anniversary as leader of the Lib Dems and hinted “new groups may emerge” in early 2019.

Sir Vince said: “There are large numbers of Labour MPs and quite a lot of Tories who are just bitterly alienated by their own people.

“I can’t see the present system can be kept going. In the new year, new groups may emerge.”

The Lib Dems experienced numerous setbacks during Monday’s vote last week. The party’s deputy leader, Jo Swinson, was unable to attend because she was caring for her newborn son on maternity leave.

A pairing agreement was made between Ms Swinson and the Conservative MP Brandon Lewis. However, Mr Lewis broke the agreement and cast his ballot.

Meanwhile, speaking on Ridge on Sunday, Conservative MP Dominic Grieve, who has recently become a Brexit rebel within his party, was asked if whether he too might be interested in a centrist party. He denied any interest and said he “wished” Sir Vince had been at Westminster “rather than dining elsewhere in London” and that he had “no idea” what he was up to.