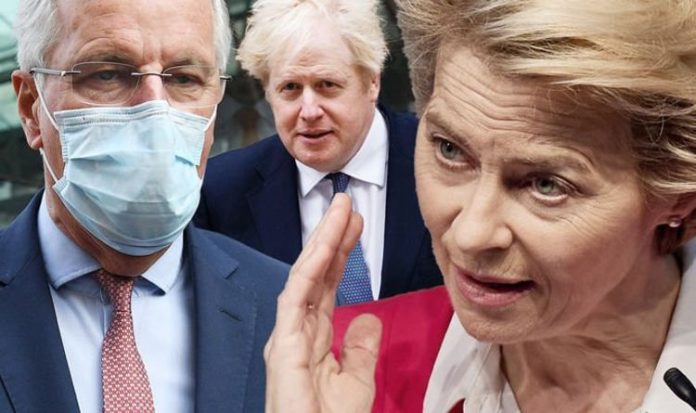 Brexit trade talks could be coming to a conclusion as reports suggest a deal is hours away from being agreed. After four years of chaos during withdrawal negotiations and months of deadlock in trade talks, one senior EU source told the Guardian this evening: “The stars have aligned.” Both sides have said they would prefer a deal, so tonight’s reported breakthrough could ease nerves surrounding Brexit both in London and in Brussels. But Brexit still represents a seismic moment in the history of Europe, and one former EU insider warned last year that Brexit and other crises facing the bloc could lead to a “huge disaster”.

German philosopher and historian Ulrike Guerot, who has previously worked with former President of the EU Commission, Jacques Delors, made the warning in a documentary aired by VPRO in 2019.

On the EU, she said: “Everyone agrees that we need a fundamental change.

“The way things are headed now, we are heading for disaster. Brexit is only the beginning.

“It won’t be a walk in the park. We can clearly see what will happen, since Brexit, every day the pound has been dropping every day.

“More and more Britons are leaving the continent…And yet Theresa May keeps saying we will do Brexit and it will be a success.”

Professor Guerot highlighted the potential surge in euroscepticism that could take the EU by storm in a “chain reaction” started by Brexit.

For now, euroscepticism in the EU remains relatively low despite the UK’s departure.

A Euronews commissioned poll found that 45 percent of respondents were in favour of Italy leaving the EU if Brexit is successful.

France was next at 38 percent, followed by Spain at 37 percent and Germany at 30 percent.

READ MORE: Emmanuel Macron handed lesson in ‘how to lose an election’

The ruling Law and Justice Party in Warsaw has also been warned by its domestic opponents that the repeated clashes with Brussels could sway public opinion in Poland towards euroscepticism.

President Andrzej Duda has used harsh terms to describe the EU, branding it an “imaginary community of little consequence for us”, while Prime Minister Mateusz Morawiecki recently warned that the bloc risks becoming an “oligarchy”.

Malgorzata Kidawa-Blonska, from the main opposition party, Civic Coalition, warned recently that this rhetoric is signalling that “what happened in the UK is starting to happen here”.

However, while fears of Polexit are growing, opinion polling in Poland still has 80 percent of people in support of membership, and Law and Justice figures have also said they do not want to leave the EU.