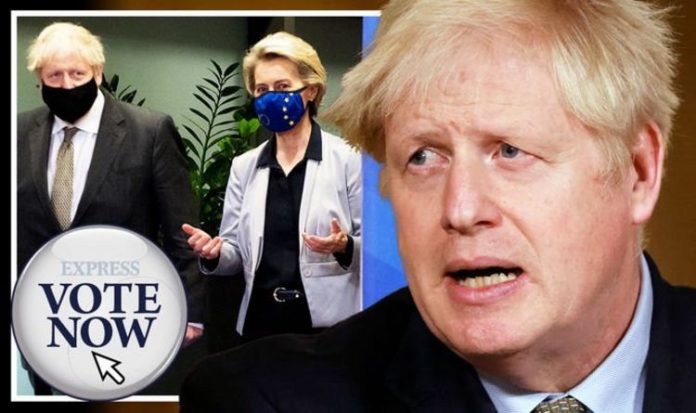 Within the Tory party, some MPs have hit out at the Prime Minister for not walking away from talks without a deal. Others are warning the Prime Minister not to cave in and agree to a deal that limits Britain’s sovereignty after exiting. Today, Tory MP North Thanet, Sir Roger Gale has broken ranks to warn the Prime Minister must resign if he fails to reach an acceptable deal with the EU.

In light of Sir Roger’s conclusion, Express.co.uk is asking readers in today’s exclusive poll: “Should Boris Johnson resign if he fails to secure a good Brexit deal for the UK?”

Sir Roger said in his tweet: “If Mr Johnson fails to reach an acceptable trade agreement with the EU the Prime Minister will also have failed the people of the United Kingdom.

“As a lifelong member of the Conservative Party, I believe that Mr Johnson’s position as Prime Minister would be untenable.

“As an honourable man, he would have to make way for somebody more able to pick up the pieces, to re-unite the whole country and to show the leadership that Great Britain and Northern Ireland deserves.”

David Cameron resigned as Prime Minister following the 2016 referendum after he supported staying within the bloc.

His successor, Theresa May also decided to step down after admitting her failure in being able to deliver Brexit.

Mr Johnson so far has failed to break the Brexit deadlock throughout negotiations and on Sunday, he and EU Commission President, Ursula von der Leyen, stated talks will once again continue.

However, both acknowledged significant gaps still remain between the two sides.

JUST IN: SNP unveils plot to vote down Brexit deal and push to rejoin EU in Jan

The EU wanted these included in order to stop the UK dropping standards and regulations to undercut the bloc.

Brussels wants to stop the UK from gaining access to the single market while setting its own standards on products, workers’ rights and state aid.

In order to break the deadlock on this issue, the EU has indicated an independent body could be established in order to maintain fair competition.

The EU’s chief negotiator, Michel Barnier briefed ambassadors today on the current state of talks and will resume negotiations with his counterpart, Lord David Frost this week.

Mr Barnier said today: “It is our responsibility to give the talks every chance of success.

“Never before has such a comprehensive agreement trade, energy, fisheries, transport, police & judicial cooperation been negotiated so transparently and in such little time.

“The next few days are important if a trade deal is to be in place on 1 January 2021.

“Fair competition, and a sustainable solution for our fishermen and women, are key to reaching a deal.”