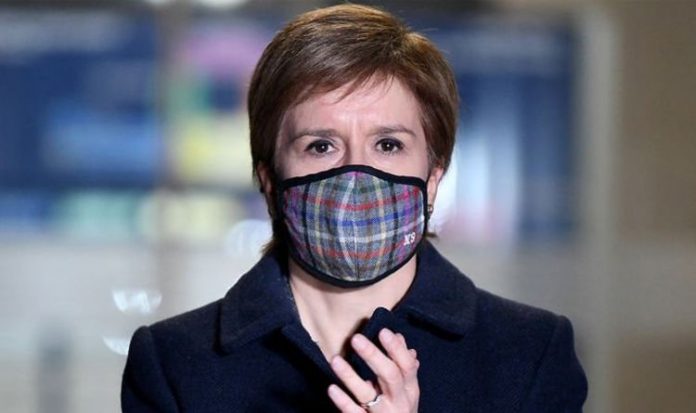 The SNP administration has ordered Scottish Government buildings to continue to fly the EU flag, alongside the saltire, every day of the year. The instruction came via the Scottish Government’s 2021 flag flying guidance, which was approved by Ms Sturgeon.

Previously the EU flag had only been raised on May 9 to celebrate Europe Day.

By contrast, the Union Jack will only be flown one day a year, to mark Remembrance Sunday.

“The SNP are making Scotland a complete laughing stock.

“Flying the flag of a foreign entity. Ridiculous.”

Another added: “As a proud Scot and Brit, this is f**king ridiculous.

“It’s petty grievance monkey nationalism and we are heartily sick to the back teeth of Nicola and her ego destroying Scotland #ResignSturgeon.”

In the run-up to that vote, senior SNP figures said the referendum would be a “once in a generation” decision.

SNP politicians have threatened to hold another referendum if they win May’s Scottish Parliamentary elections without the British Government’s permission.

Should this happen Scottish Conservative leader Douglas Ross has urged unionists to boycott the poll.

Speaking about Ms Sturgeon’s decision to keep the EU flag flying in Scotland, commentator Emily Hewertson, said: “This woman is in denial.

“I guess she will never accept that her country voted to stay in the UK, nor that the UK voted to leave the EU.

“Silly little games like this is all she has left.”

However other social media users defended the move.

One pointed out: “I saw EU flags in Romania in 2004 before they joined three years later.”

Another added: “The UK remains part of the Council of Europe, so it’s ok to fly the flag.”