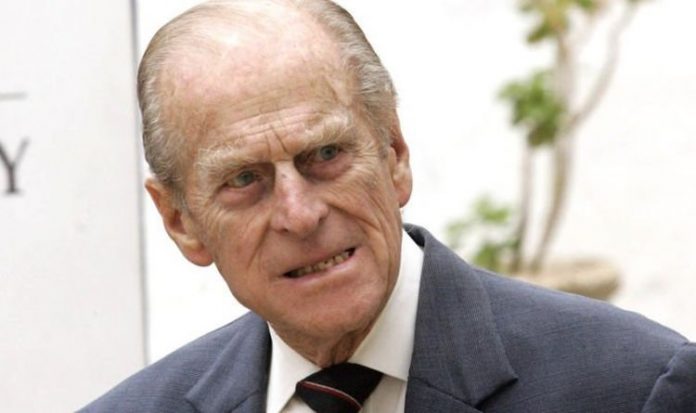 Prince Philip will be ‘climbing walls’ in hospital says insider

Prince Philip is known for not wanting any “fuss” when it comes to his health or his personal milestones. And he has shown this side of himself to reporters a few years ago while carrying out a royal engagement, according to commentator Rebecca English.

Appearing on Mail Plus’ Palace Confidential, the Daily Mail royal correspondent was asked whether she could recall any funny quip or remarks the Duke had made at her expenses.

She said: “I can’t remember what year it was but I do remember one occasion when he had been ill, I think he might have come out of hospital even, and we were on a job and we from the press court kind of shouted out ‘how are you sir?’

“And he turned around and said ‘do I look bloody ill?’

“He was really snappy about it!

Prince Philip health latest: The Duke once snapped at reporters asking how he was feeling – report (Image: GETTY)

“He is known as the Iron Duke, and rightly so.”

The Duke was admitted to King Edward VII Hospital in London on Tuesday evening, Buckingham Palace said, as a precautionary measure.

The palace said Prince Philip was “feeling unwell”, with sources adding the hospitalisation was not an emergency admission.

The Duke of Edinburgh will unlikely receive any visitors while he is in hospital, given the safety measures in place during the coronavirus pandemic.

And, according to one source, he is likely being “extremely stoic” about it.

The insider told : “Everyone loves a visitor when they are feeling low in hospital but the Duke will be extremely stoic about it.

“He knows the nation is sending their thoughts and prayers.

“The Duke has been in HMS Bubble for almost a year so he is used to all kinds of restrictions.

Prince Philip health latest: Prince Philip and the Queen have been self-isolating at Windsor Castle for the most part of 2020 (Image: GETTY)

Prince Philip health latest: Prince Philip will likely not have any visitors during his stay at the hospital (Image: GETTY)

“He has barely been able to see his family for the past year.

“He knows only too well people have been going through worse than him.”

One royal expert pointed out Prince Philip’s lack of love for any “fuss” may make him a difficult patient.

Royal biographer Penny Junor told BBC Breakfast: “I think you would not want him on your shift.

“Well, I think he can be quite blunt and I think if he felt that people were fussing over him he could be quite outspoken about that.

Prince Philip’s health has been a cause of concern for his family and royal fans alike over the past decade.

In 2008, he visited King Edward VII Hospital to be treated for a chest infection.

In 2011, Prince Philip was rushed to the cardio-thoracic unit at Papworth Hospital with chest pains and underwent a coronary angioplasty and stenting.

During the Queen’s Diamond Jubilee celebrations in June 2012, the Duke of Edinburgh was hospitalised for a bladder infection and admitted back to hospital in August as a precaution.

The following year he underwent an operation on his abdomen and returned to hospital again in 2014 and in 2017 – respectively for a procedure on his hand and another infection.

Just weeks before Meghan and Harry’s wedding, which he attended walking unaided, the Duke underwent a planned hip operation.

And in December 2019 he returned to King Edward VII Hospital for a few days “for observation and treatment in relation to a pre-existing condition”, as stated by Buckingham Palace.