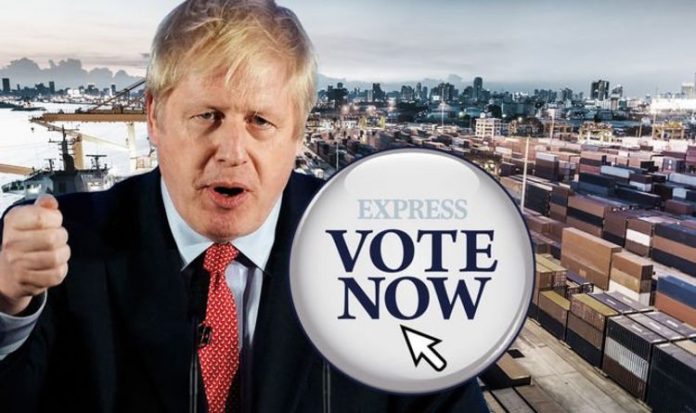 The US is top of the Prime Minister’s list but Congress has warned the UK it will block a trade deal if the Brexit withdrawal agreement’s Northern Ireland Protocol is undermined. Other top potential trading partners include Australia, New Zealand, Canada, India and South Korea. International Trade Secretary Liz Truss said the Japan deal was a “historic moment” for both countries.

She said: “The agreement we have negotiated – in record time and in challenging circumstances – goes far beyond the existing EU deal, as it secures new wins for British businesses in our great manufacturing, food and drink, and tech industries.

“From our automotive workers in Wales to our shoemakers in the North of England, this deal will help build back better as we create new opportunities for people throughout the whole of the UK and help level up our country.

“Strategically, the deal is an important step towards joining the Trans-Pacific Partnership and placing Britain at the centre of a network of modern free trade agreements with like-minded friends and allies.”

Mr Johnson said: “We have taken back control of our trade policy and will continue to thrive as a trading nation outside the EU.”

The UK-Japan Comprehensive Economic Partnership Agreement was agreed in principle by Ms Truss and Japan’s foreign minister Motegi Toshimitsu in a video call this morning.

Negotiations began in June – with most talks happening remotely due to the coronavirus pandemic.

A final text of the agreement is likely to be published in October.

It is expected to increase trade with Japan by an estimated £15.2 billion.

Under the agreement, 99 percent of exports to Japan will benefit from tariff-free trade and there will be more protection for goods with geographical indications – including Yorkshire’s Wensleydale cheese and Welsh lamb.

It will provide more liberal rules of origin and will allow producers of coats, knitwear and biscuits to source inputs from around the world for exports to Japan.

Industry leaders welcomed the Japan-UK deal, with the British Chambers of Commerce (BCC) saying it is “undoubtedly a cause for celebration”.

But BCC director-general Adam Marshall said securing a free trade agreement with the EU “remains critical to the future of businesses in the UK”.

He added: “We urge ministers to redouble their efforts to reach a comprehensive partnership with our largest trading partner at a crucial time in the negotiations.”