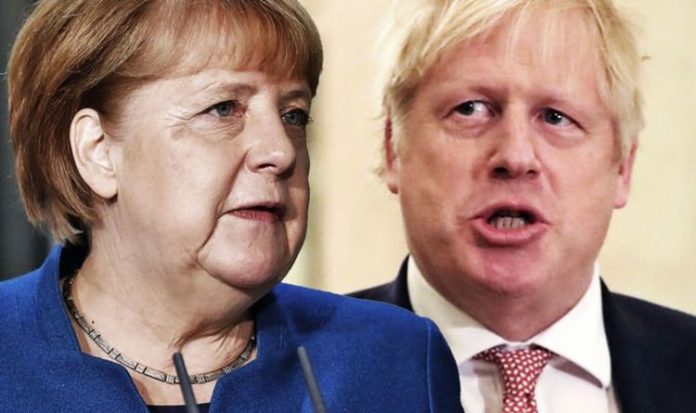 The Brexit trade deal, signed after arduous negotiations, was greeted with relief in both Brussels and London last month. However, while the EU and the UK have both expressed the need for a strong partnership across the Channel – sledging has already resumed as European media warn the UK will lose out as a result of Brexit. Editor of German magazine Der Spiegel, Markus Becker, said Brexit will be a heavy blow to the UK while boasting that the EU will enjoy more freedom.

He said: “The EU will be freer to take the steps it needs to take in order to assert itself against the USA and China – because it is running out of time to do so.

“Great Britain, on the other hand, might need Brexit to realise how small the bit part it will play on the world stage will really be.”

Mr Becker also argued that the UK never truly saw itself as a part of Europe.

He continued: “Many politicians and citizens in Great Britain do not perceive themselves to be Europeans among many other Europeans.

“And Great Britain does not think of itself as one European country among many, but a very special or even chosen one.

“Of course, not all Britons think like that. But sadly they are not the ones currently in charge. That is why their country’s departure from the EU is not an unreasonable development.”

It said: “Bells are tolling for the ‘divide and conquer’ tactics London used for centuries to block the emergence of a dominant European power.”

One writer said: “Those who think the Brexit drama comes to an end with this deal will be bitterly disappointed.

“In the coming years and decades, there will be plenty of reasons to call on the arbitration bodies envisioned in the deal, likely under the threat of tariffs. The drama will carry on. Sadly.”

This warning echoes comments by Ivan Rogers, former UK ambassador to the EU, who said in November that a deal may not end disagreements, as the UK’s gradual divergence away from EU laws and regulation could spark fresh rows.

He said: “There are lots of forces driving a gradual divergence.

“The question is, is that divergence governable and relatively smooth and reasonably amicable while we remain close friends, or does it become bumpy, difficult, conflictual, or maybe worse than conflictual — constantly flaring up into trade wars as people bite chunks out of each other?”

The feeling in Europe was also epitomised by Belgian MEP Philippe Lamberts – who told Express.co.uk that the UK’s influence would be reduced outside of the bloc.

He said: “I can recognise some people in the UK think the good old days of the empire can come back, and that Britannia can rule again. But this is over.

“The only way to have influence is to be a part of something bigger.”