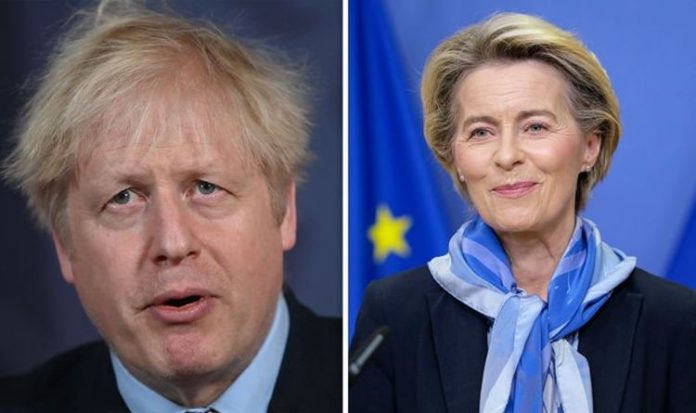 He said: “We have taken back control of our laws and our destiny.

“It is a good deal for all of Europe”.

Back in Brussels, Ms von der Leyen was slightly more sombre, saying one of her main feelings was “relief” that “we can finally put Brexit behind us”.

In an infographic posted by the European Commission yesterday, though, Brussels hinted Brexit talks might be far from over.

The deal ensures tariff-free trade for goods will continue and details how the two economies will interact on issues ranging from security cooperation to fishing rights but it is not entirely clear how it will affect financial services.

Both sides had agreed during the negotiations to discuss financial services separately.

The Prime Minister said there was “some good language about equivalence for financial services” but he added the access negotiated for finance firms was “perhaps not as much as we would have liked”.

In the infographic posted on Twitter by the Commission, the EU suggested a deal on financial services could be indeed agreed further down the line.

“I think that if we do get a deal now, there will be much more flexibility and we will try to negotiate around the edges.”

Professor Winters added: “I am almost certain that the trade deal will allow us to add new issues into it.

“For example, we will have a provision whereby we haven’t achieved much on business services but we will set up a system that allows us to go back and renegotiate it.

“It will take a while as the politics here are complex.”