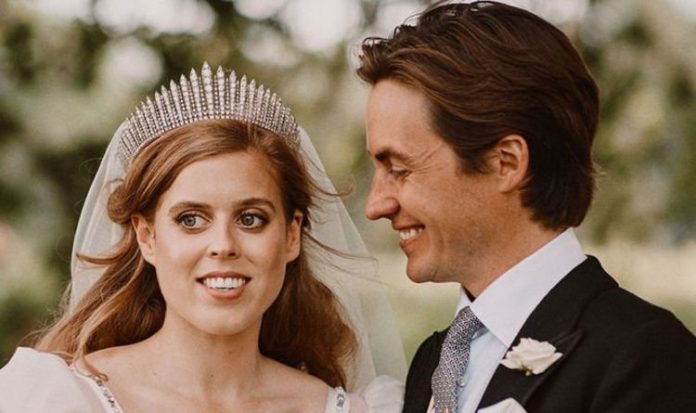 Princess Beatrice, 32, the eldest daughter of Prince Andrew and Sarah, Duchess of York, married Edoardo Mapelli Mozzi in Windsor on July 17. Beatrice wore the Queen’s vintage Norman Hartnell gown in the secret, socially-distanced ceremony. But she had another dress in mind and might wear it in a second ceremony in 2021, according to royal reports.

Speaking on the HeirHeads podcast, presenter Meadhbh said: “We had heard that Beatrice and Edo would have a second ceremony where she could wear her original dress which she had planned for the wedding.

Co-presenter Tom added: “It was so disappointing after our speculation on what she was going to wear.”

Meadhbh added: “And knowing that she had another dress in mind but was stuck with this one.

“I would like that for her and for a day that is less defined by her grandfather and grandmother.

“That’s just about her and her husband and her unique sense of style.”

She got engaged to Edo while on holiday to Italy in September 2019 and the Queen offered Buckingham Palace as a venue for the reception.

If Beatrice was to go ahead with her wedding this year she will only be able to have two guests at her wedding if the coronavirus crisis continues.

The Church of England has said the number of people attending church weddings during the outbreak should be limited to the legal minimum of five – the priest, the bride and groom and two witnesses.

Royal expert Omid Scobie believes Beatrice’s next wedding date will be in 2021,

Speaking on ABC News’s HeirPod, Mr Scobie said: “We heard before that the Queen was hosting a reception at Buckingham Palace in the gardens, that’s no longer taking place.”