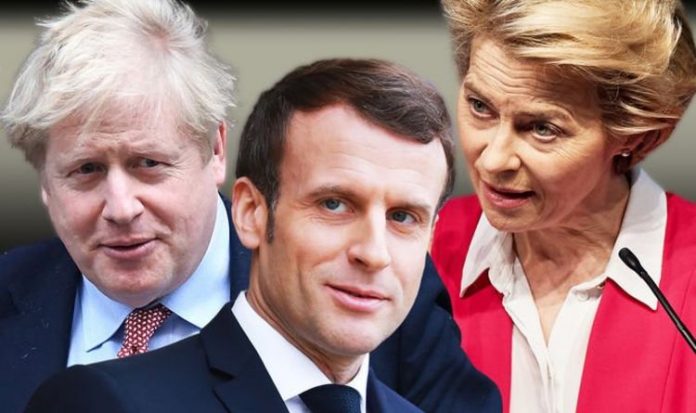 Fishing rights have been a sticking point in Brexit negotiations since talks began. Currently, foreign companies own the rights to catch more than 130,000 tonnes of fish every year that are part of England’s fishing quota. This equates to more than £160m (€179m) worth of the English quote being in the hands of vessels owned by companies based in Iceland, Spain and the Netherlands, according to reports – some 55 percent of the quota’s annual value in 2019.

Sovereignty over fishing is a key aspect of the UK’s taking back control from Brussels.

Yet, many European fishing officials refuse to accept this notion, including Gerard Van Balsfoort, Pelagic Freezer Trawler Association in the Netherlands who vowed to not lose the battle over Britain’s waters.

He said: “It is a very simple game: whatever you gain, I lose and vice versa.”

He was then asked by ITV whether he was willing to lose this game.

He continued: “We have a very simple message: don’t change the current systems.”

As things stand, international law gives each state the rights and duties of stewardship over the marine resources that fall under their exclusive economic zone (EEZ) – a strip of sea that extends up to 200 nautical miles beyond that state’s territorial waters.

Under the EU’s Common Fisheries Policy (CFP) all areas are treated as one, giving countries like Spain, France and the Netherlands access to the UK’s waters.

Now, the EU’s automatic access right to fish in UK waters is removed.

However, warnings on Brussels’ side remain.

French MEP Nathalie Loiseau, insisting any future relationship with the UK would rest on EU vessels being given fishing rights in Britain, said: “Much progress has been made. But there are still important disagreements, and the UK must move on them.

She continued: “If the United Kingdom wants to continue to trade with Europe without hindrance, it must undertake not to choose production standards that diverge from ours, for example in terms of the environment or health.”

Mr Macron, meanwhile, appears to want equal access for European fishermen in UK waters as the price for any trade deal.