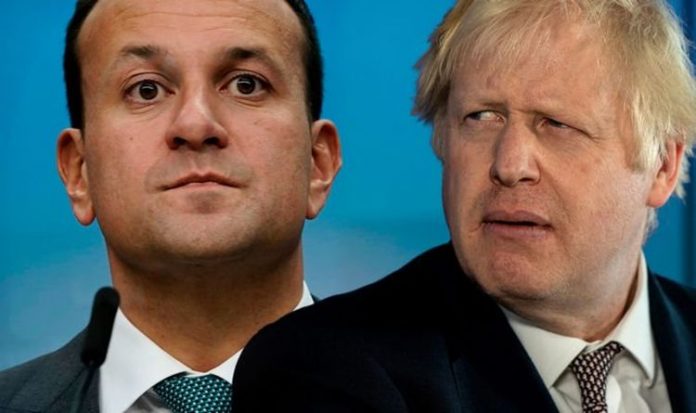 How the border between Northern Ireland and the Republic of Ireland looks after Brexit has dominated the news cycle over the past three years. However, the border was barely mentioned in the run-up to the EU referendum. Matthew O’Toole, from County Down, worked in Downing Street as a Europe spokesperson during the campaign.

“It definitely was not a first-tier issue.”

Downing Street’s argument was perhaps not aided by the fact that the then Northern Ireland Secretary, Theresa Villiers, was also a staunch supporter of leaving the EU.

She took a totally different view to many of her Cabinet colleagues, facing criticism for saying that if Brexit happened, the UK would keep an open border with Ireland and described claims to the contrary as “scare tactics”.

Even Prime Minister Boris Johnson said that he did not believe the Irish border would ever present a problem during the campaign.

This is why when negotiations began after the 2016 EU referendum, the tough Irish stance blindsided British officials.

Britain had believed that the question of how to avoid creating a hard Irish border would have been “parked” until the EU opened talks over trade and the future relationship.

However, a leaked European Commission document entitled “Dialogue on Ireland/Northern Ireland” and published in November 2017 showed Ireland was all of a sudden pushing hard for concrete reassurance on the Irish border question.

The one-page paper stated that in order to preserve the Good Friday Agreement peace deal, the withdrawal agreement had to respect “the integrity of the internal market and the customs union”.

It added that it was “essential” that the UK committed to avoiding a hard border by remaining part of the EU customs union and continued to abide by the “rules of the internal market”.

It concluded that Britain had to ensure “no emergence of regulatory divergence” from the rules of the EU single market and the customs union, which are “necessary for North South cooperation, the all-island economy and the protection of the Good Friday Agreement”.

The hardline Irish position was described by a senior EU source as reflecting the “state of play” and the “guiding principles” of the EU’s approach to the problem.

A source familiar with the talks said that Dublin was “pulling the levers” and had decided to use tensions over Britain’s proposed withdrawal as the moment to “exert maximum leverage” and extract concessions from the UK.

The source said: “Dublin sees their leverage point is now, as Britain fights to get a ‘sufficient progress’ designation, not in phase two.”

The department for Exiting the European Union (DexEU) reiterated the UK intended to both leave the single market and customs union, but also avoid a hard North-South border.

“The Government is determined to find specific solutions to Northern Ireland’s unique circumstances, not least as the only part of the UK to share a land border with an EU member state.”

Both the Irish ministry of foreign affairs and the European Commission declined to comment on the leaked document, which was originally published in The Telegraph.

However, a senior Irish government source confirmed the document reflected the state of play on the issue.

The Irish border ended up becoming a sticking point during the withdrawal agreement talks.

The Brexit deal negotiated by Theresa May and the EU was catastrophically defeated in the House of Commons on three occasions – arguably because the former Prime Minister had agreed to what is now known as the Irish backstop.

The backstop was a key protocol, designed to be an insurance policy that ensured there would be no hard border between the Republic of Ireland and Northern Ireland, even under a no deal scenario.

As soon as he moved into Downing Street, Mr Johnson demanded for the backstop to be removed in its entirety and against all odds, he secured a new withdrawal agreement and political declaration.

Under his proposals, Northern Ireland will leave the EU’s customs union at the same time as the rest of the UK, meaning that the province can benefit from any future trade deals struck by the Government after Brexit.

However, Northern Ireland will remain an entry point into the EU’s customs zone, and UK authorities will apply UK tariffs to products entering Stormont.

For goods at risk of entering the single market, the UK will collect EU tariffs on behalf of the bloc.

The central point of the deal states the two sides are “underlining their firm commitment to no customs and regulatory checks or controls and related physical infrastructure at the border between Ireland and Northern Ireland”.

It also states unequivocally that “Northern Ireland is part of the customs territory of the United Kingdom”.

Controversy surrounding the Irish border did not end when these proposals were agreed, though.

Once the Brexit transition period ends on December 31, Mr Johnson now wants to impose new rules on the devolved governments to stop goods and services from different parts of the UK undercutting those in the other parts.

He also wants to ensure regulations are the same across the four nations so the market is borderless.

In order to achieve this, the Government published the Internal Market Bill at the end of September – but it is currently facing legal action from the European Commission, as the Bill would essentially overwrite the withdrawal agreement.