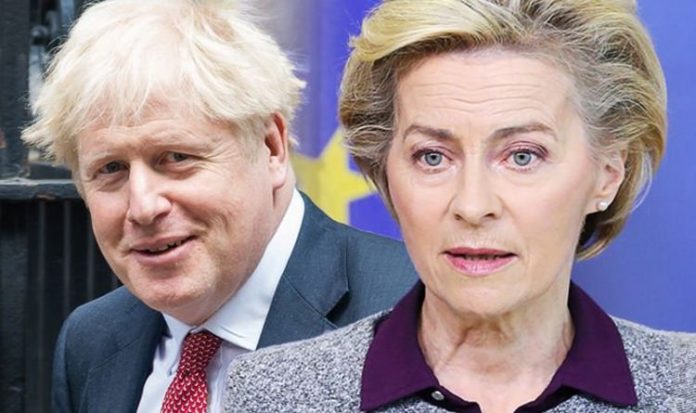 The implementation of the Brexit trade deal hasn’t calmed the chaotic relationship between London and Brussels as multiple disputes continue. The Government has come under pressure from the fishing industry in recent weeks, as many feel aggrieved as a result of the Brexit deal. The ill-feeling was worsened when the EU restricted the import of oysters, mussels, scallops, and cockles from the UK. Northern Ireland has also faced difficulties since January 1, with problems arising over supplies of items like fresh food and chilled meat to supermarkets under the new arrangements.

The British Government has sought to tweak the protocol, but this has been rebuffed by the EU.

Northern Ireland was also at the centre of a vaccine row when Brussels threatened to block vaccine imports into the country.

The EU has also been affected by the UK’s withdrawal, and experts warned after Britain officially left the bloc that the European project will face challenges without one of its major players.

Andrew Duff, the president of the Spinelli Group which lobbies for a more federal Europe, said that the bloc hadn’t properly considered the negative impacts Brexit would have.

He said: “The EU has not yet, in my view, understood the full consequences of becoming smaller, poorer and therefore weaker.

A more obvious impact Brexit has had on the EU is the loss of the UK’s £65billion contribution to the bloc’s budget.

According to experts from Carnegie Endowment for International Peace, this could spark a divide in the EU.

The experts said in March: “The UK’s departure leaves enormous political and financial gaps in the EU.

“Power in the bloc will shift toward Germany and especially France led by a dynamic and ambitious President Emmanuel Macron.

“Moreover, the loss of the union’s biggest non-eurozone member will move the centre of gravity more toward the eurozone members, will leave a €75billion hole in the EU budget, and will raise questions about the EU’s future direction.”

David Marsh, a historian who focuses on the eurozone, told Express.co.uk last year that the monetary union in Europe could be threatened by the coronavirus pandemic.

DON’T MISS
Brexit: French figure told UK ‘get out of EU before you wreck it!’ [INSIGHT]
EU could ‘bleed to death’ as Netherlands risk bloc ‘disintegration’ [ANALYSIS]
Barnier’s fury at Brexit ‘spin’ as he fumed at Johnson [INSIGHT]

The European economy has seen a slower recovery than some of its international peers as the vaccine delays and continued lockdowns take their toll.

It shrank 0.7 percent in the last three months of 2020, and the 19 countries that use the euro are forecast to lag China and the US in bouncing back from the worst of the pandemic.

Statistics agency Eurostat calculated that the European economy was hit with a 11.7 percent plunge in the second quarter, the biggest since statistics started in 1995, followed by a rebound of 12.4 percent in the third quarter in late summer.

Germany, an economic heavyweight in the EU, managed to achieve a small 0.1 percent growth in the final quarter of 2020 while France’s contracted by 1.3 percent.