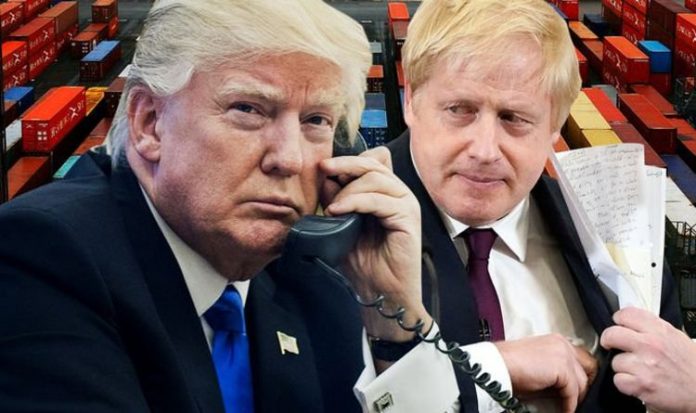 The idea of Brexit Britain striking a trade deal with the US in the agricultural sector has sparked fears the US would force the UK to drop its food standards and adopt chlorinated chicken and hormone-treated beef into its markets. However, Shanker Singham, head of Trade at the Centre for Economics and Business Research spoke to Times Radio and revealed the key reason why this would not happen.

Mr Singham also claimed the US and UK are not as far apart from an agreement as many think.

Mr Singham said: “Agriculture is certainly an issue between the UK and US.

“But it is important to understand what the US is asking for.

“All the US is asking for from their negotiating mandate is that the UK will comply with the WTO rules, the so-called sanitary and phytosanitary rules in the WTO.

“The US is not really asking for anything more than that, in fact, the US’ negotiating mandate specifically says that the UK should not lower its labour or environmental standards.”

Mr Singham argued people need to look at the details of the UK-US trade deal before fearing the worst for the UK in a post-Brexit environment.

He said: “There is a lot of heat on this issue, I think when people actually look at what the US is asking for and what the UK is able to deliver, the sides are not as far apart as people might think.

“If you’re lean and agile, then you can actually do good trade deals.

“The trade deal is not a zero-sum game, it’s not US vs the UK, you’ll look to expand markets, and that’s a win-win for both sides.”

While a post-Brexit trade agreement with the EU has proven to be difficult, International Trade Secretary Lizz Truss has insisted the UK will be able to have multiple deals with international giants across the world.