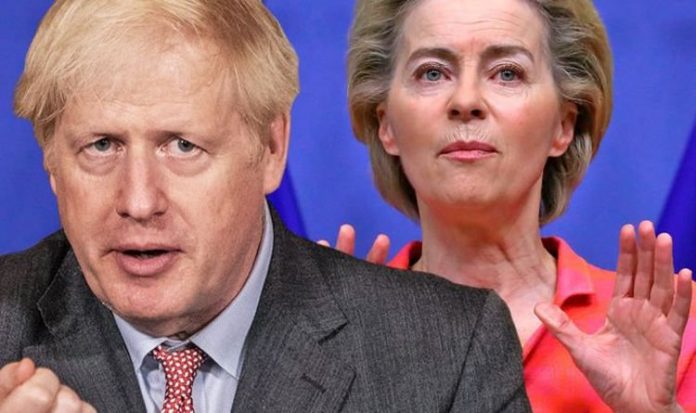 Chief negotiators, the UK’s David Frost and the EU’s Michel Barnier, will continue post-Brexit talks until Wednesday in London. It comes with just weeks to go before the end of the transition period. Britain is currently facing the prospect of a no deal scenario.

This is unless a deal is brokered soon.

According to the BBC, EU sources say more deal talks are planned in Brussels from Thursday.

Much deliberation has surrounded a final deal, with rights around fishing and competition rules remaining unresolved.

Mark Littlewood, the director general of the Institute of Economic Affairs (IEA), told Express.co.uk that in order to secure a lucrative deal with the EU – and further afield – the UK Government should look to make “piecemeal” agreements rather than outright mammoth deals.

He explained: “We shouldn’t look at achieving a trade deal as being the full and final word on our relationship with a country or indeed the EU.

“If we can make piecemeal agreements with the US, the EU or any other country, where we might agree on one particular aspect of manufacturing but not on any aspect of agriculture, for example, then I think it’s worth putting through those deals and returning to the table year on year to try and get new ones through.

“Taking this approach, similar to that taken by New Zealand, seems actually to deliver better dividends; better and more liberalised trade over the long term, rather than having a determination that we’re going to sit down over a negotiating table over a period of weeks and then get a final comprehensive unaltered document that will be the law for all time.

READ  May to give £1.5bn boost to Northern Powerhouse | Politics | News - UK

Should the UK and EU fail to reach an agreement by the end of the transition period, the two sides will trade on World Trade Organisation (WTO) terms.

Critics of Brexit fear that failure to strike a deal will result in a serious economic fallout for UK businesses.

This will come in addition to the coronavirus pandemic and subsequent recession.

Despite this, many senior members of Mr Johnson’s cabinet remain positive that a deal should happen.

Mr Lewis told the BBC’s Andrew Marr show: “The fact that Michel Barnier has outlined in the last week or so that they are going to come back and do these intensive negotiations, he recognises the EU do need to move, and that he is staying through to next week, is… a very good sign.”

He added that the UK had to “make sure that it is a deal that works not just for our partners in Europe – we want to have a very good relationship with them obviously – but one that works for the United Kingdom.

“I think there is a good chance that we can get a deal. But I think it is for the EU to understand that it is for them to move as well.”

The EU had initially said it needed a deal to be agreed by the end of October to allow time for it to be approved by the various and relevant Parliaments.

Mr Johnson, however, had threatened to walk away by October 15.

After intense rhetoric on both sides, the two agreed on moving towards “fundamental changes” in approaching negotiations.