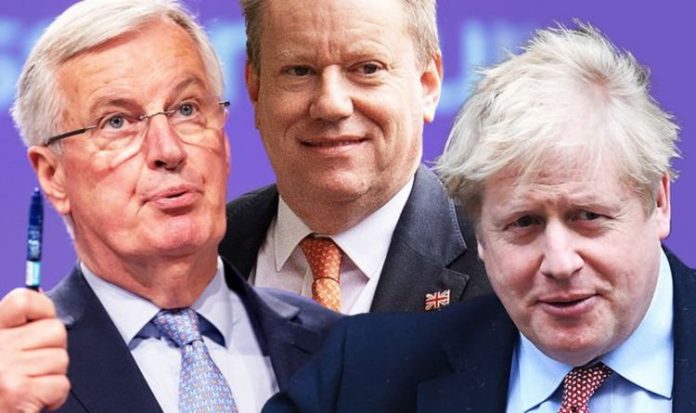 Government sources said last month that the EU’s approach to trade talks has resulted in “paralysis”. Brexit negotiations have stalled in recent months over two key issues – fisheries and regulatory alignment. Prime Minister Boris Johnson wants to fulfil a Leave campaign promise that the UK will take back control of its waters post-Brexit. Previously, EU vessels had free access to British fishing grounds, leaving many fishermen in the UK aggrieved.

The EU’s negotiating team attacked Mr Frost during trade talks after Boris Johnson’s ally was given a new job as National Security Advisor before the Brexit trade deal was finished.

Mr Barnier had been linked with the President of the European Commission role, but sources in Brussels claimed the French politician ruled himself out to complete Brexit talks.

One EU diplomat used this to criticise Mr Frost.

They said: “Barnier didn’t run for commission president to deliver Brexit but doing that isn’t enough for Frost apparently.

READ  Drivers could be hit with penalty points and fine £1,000 for these number plates | UK | News (Reports)

“Is there such a shortage of people in the UK that they had to pick the chief negotiator?

“But then again when did a British official last refuse an honour? On the other hand now everything that goes wrong in Britain now will be Frost’s fault.

“Our overall message this week but also for the coming weeks and coming months is to intensify our negotiations in order to make progress in order to get a deal.

READ MORE: Dutch fisherman’s fury over Brexit fishing feud: ‘These are my waters’

He added that the EU was willing to accept that “there may be change to the benefit of UK fishermen” but that it would not be at the price of the “destruction of the EU fishing industry”.

He said: “It means simply that by its current refusal to commit to the condition of open and fair competition, and to a balanced agreement on fisheries, the UK makes a trade agreement at this point unlikely.”

However, Michael Gove said last week that he was confident a deal could be reached.

He said: “I’m confident that there will be a deal, I think there has been a welcome change in tone over the last few weeks.

“The omens are good for a deal. Now of course there is some tough talking to do. I believe that there will be a successful negotiated outcome.”