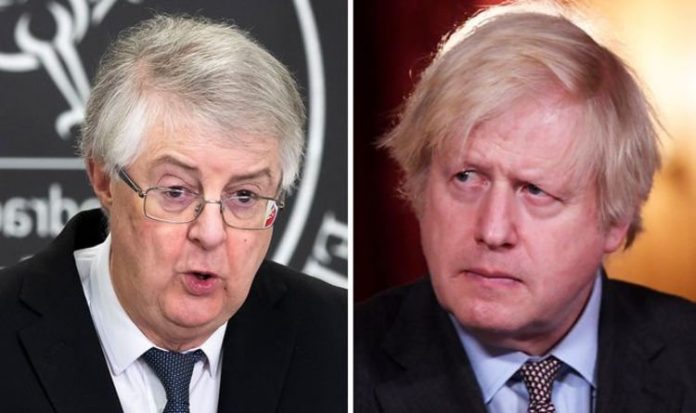 Welsh voters chose to leave the EU by a majority of 52 percent to 48 percent in the referendum, despite being one of the largest beneficiaries of the bloc’s funding. However, just weeks after the transition period drew to a close, calls for Welsh independence are growing. While this is still a minority view, a former devolution adviser to David Cameron, Lord Dunlop, has recently warned that there is “no room for complacency” when it comes to pushing pro-unionist sentiment in Wales.

Yet, Welsh farmers accused the Government of a “Brexit betrayal” after the sector’s budget was slashed by £95million this year — despite the Conservatives promising in 2019 it would maintain agricultural development funding.

The Welsh Government also fought back against a controversial post-Brexit law, the Internal Market Bill, after claiming it would “neuter” devolution before it was dropped last year.

Even so, the Government promised to pay £243million to Welsh farmers after Brexit last January, once they left the EU’s Common Agricultural Policy (CAP) — which made up the majority of some farmers’ income.

However, there is concern over how the farmers will cope without direct payments.

Then, most recently, the Welsh Government announced a “radical” new plan to help farmers tackle climate change by paying them.

But, as Plaid Cymru, the pro-independence party, said, without any stability payment or subsidy, “farms are being asked to jump off a cliff without a safety net”.

The Welsh Conservatives also said the plan, announced in December, had a “lack of substantive detail” and the Government had left it to the “last minute”.

With this complicated backdrop, an essay from the Dean of St Davids and former British diplomat, Sarah Rowland Jones, shines a light on how financial support for farming could be key to Westminster maintaining a good relationship with Wales.

The timeline of events leading up to Brexit (Image: Express)

She explained that the EU’s “structural funds have promoted growth at a higher than average rate, but the base level remains very low” and there are risks major employers could jump ship after Brexit.

She noted that transport delays would cause severe damage to agriculture and food sectors, although this is currently an issue affecting trade in and out of Northern Ireland.

But, Ms Rowland Jones explained that “Brexit could be good for Wales economically” if the agriculture sector was managed correctly.

She explained: “This could be the case if London maintains subsidies in both agricultural and structural funds, at current levels, and if Wales largely controls the money.

“There would be less paperwork, shorter administrative chains, more control over fraud and so forth.

“But these are two big ‘if’s and no one is holding their breath.”

Brexit: Expert warns UK has to be ‘innovative’

Indeed, with the £95million cut announced for this year, and growing support for independence, concern is spreading among unionists.

However, it is worth noting that January’s Welsh Political Barometer poll for ITV Wales and Cardiff University found only 22 percent of the Welsh electorate would vote yes to independence.

Fifty-three percent said they would vote no, while a quarter said they were not sure.

Yes Cymru, the pro-independence campaign, claimed that over the last year its membership has leapt from 2,000 to more than 17,000.

‘The Future of Brexit Britain: Anglican Reflections on National Identity and European Solidarity’ edited by Jonathan Chaplin and Andrew Bradstock was published by SPCK in 2020 and is available here.