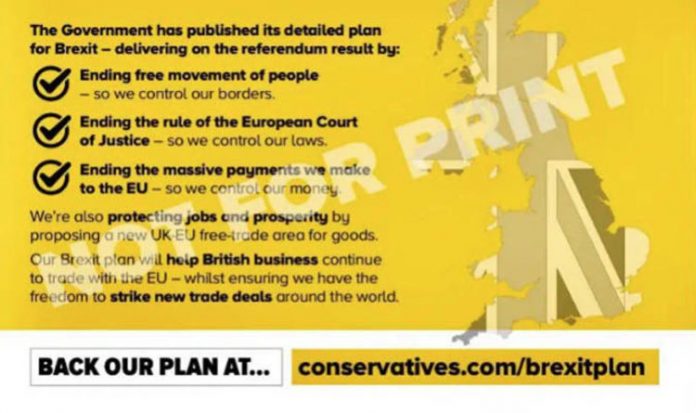 Conservative Party officials urged constituency associations to buy thousands of the flyers for posting through the letterboxes of voters around the country.

Printed in a yellow design similar to Lib Dem literature, the lefleats claimed the Prime Minister’s blueprint for a deal with Brussels would deliver on the result of the 2016 EU referendum “by getting control of our borders, laws and money – and protects jobs and prosperity”.

But anti-Brussels Tories critical of Mrs May’s plans vowed to refuse to deliver it.

Tory backbencher Maria Caulfied, who quit as a vice-chairman of the Conservative Party in protest at the Brexit plan agreed by the Cabinet at Chequers last month, said: “Members are frustrated that their views are being dismissed as the Government seem hell bent pushing on with Chequers whatever the consequences for the country or the party.”

Ms Caulfield alerted fellow backbenchers to the leaflet via a private social media group for Tory MPs on the WhatsApp network.

She said the flyer would fuel anger among Tory activists already irritated by a party probe into Foreign Secretary Boris Johnson’s outspoken remarks and a letter from Mrs May to Tory members urging them to rally behind her Brexit plans.

“I’ve seen the leaflet produced by CCHQ today which they are expecting associations to buy and then deliver on the Chequers plan,” Ms Caulfield said in a WhatsApp message.

“My phone has not stopped ringing with angry calls this morning from officers and councillors. Are the powers that be determined to add insult to injury after the white paper, Boris, the PM letter and now this?”

Fellow Tory MP Laurence Robertson  “Who are those leaflets expected to be delivered to? The electorate? They have already given their verdict. Unless the Government is secretly planning a second referendum. I think this needs an explanation.”

And Marcus Fysh, a Brexit-supporting Tory MP who has urged the Prime Minister to quit, said of the leaflet:  “Utterly moronic I’m afraid. The sooner this administration is changed the better. In Lib Dem yellow too.”

The double-sided leaflet, which features an outline of the UK printed with a Union Flag design, was headed: “The Government’s plan for Brexit means the right deal for Britain.”

It claimed the Government was “delivering on the referendum result” by ending free movement of people, the rule of the European Court of Justice and the “massive payments” the country makes to Brussels.

“Our Brexit plan will help British business continue to trade with the EU – whilst ensuring we have the freedom to strike new trade deals around the world,” the leaflet said.

Many of the claims have been contested by Euro-sceptic Tories who fear Mrs May’s plan will leave the UK closely tied to Brussels forever.

The leaflet urged people to “back our plan” by signing up in support of the proposals on the Conservative Party website.

Local parties were understood to have been encouraged to buy the leaflets in batches of 1,000 each for delivering to households in their areas.

Tory backbencher Andrew Bridgen said: “Conservative Campaign Headquarters has completely lost the plot if they think we are going to pay for and deliver these leaflets. It’s like being asked to sign your own political death warrant.

“The public have given their verdict on the Chequers proposals and quite honestly the more they find out about them the less they are going to like them.”

Mr Johnson and former EU Exit Secretary David Davis both quit the Cabinet after declining to support the Prime Minister’s blueprint put to ministers in a meeting at Chequers last month.

Several other frontbenchers and MPs with Tory party roles quit their posts followed them.

Mr Bridgen and other MPs have warned that the blueprint agreed by the Cabinet at Chequers could cost the party votes at the next general election by disappointing voters who backed Leave in the EU referendum.