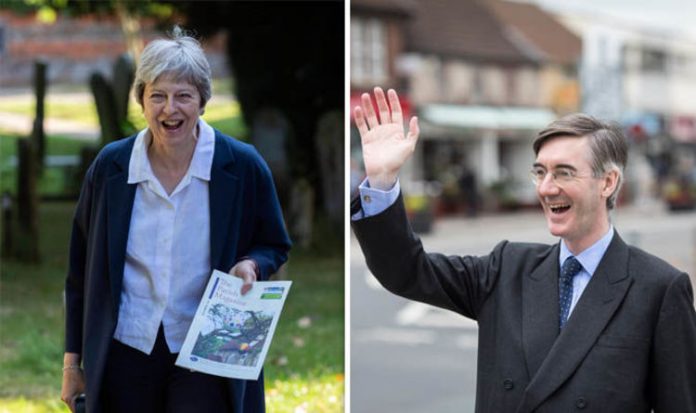 Divisions at the top of the Tory Party seemed to have widened ahead of a crunch Brexit war cabinet summit on Friday, fuelling speculation that the Prime Minister could be deposed.

Supporters of a Rees-Mogg leadership bid said plans were quite advanced and it is understood that another pro-Brexit Tory MP plus a former Ukip member have raised more than £750,000 for a campaign and have chosen a firm to run it.

The strategy also involves recruiting “pro-Brexit and socially conservative” people as well as ex-Ukip members to ensure Mr Rees-Mogg has the support of the Tory membership – crucial if he became one of the two final candidates in any leadership election.

A senior Tory figure said: “We have given up on Theresa May and the current Cabinet. The membership love Jacob. He is the only one standing up for true Conservative values.

“It’s obvious Britain is going to be sold out by the Government on Brexit because none has the backbone to do the job properly. Jacob Rees-Mogg is the only man who can save Brexit and we need him as leader.”

Another backer said: “It is telling that liberal Remainer elites have tried to demonise Jacob. They know he is the real threat to them.

“His honesty and integrity are rare things in politics and people like it when they see it.” Mr Rees-Mogg has said he was “unaware” of a leadership fund.

Meanwhile, it was reported Mrs May told Brexiteers she would stand firm in any confidence vote and would be content “to win by one vote”.

Former deputy prime minister Damian Green said: “Every minister has a responsibility to think about his or her own public words and decide whether now is the right time to be parading some individual hobby horse.”

But in a sign Brexiteers in Parliament are losing patience with Mrs May, 36 MPs signed a letter demanding she shows “courage and leadership” in EU negotiations and warned her not to extend the transition period beyond December 2020.