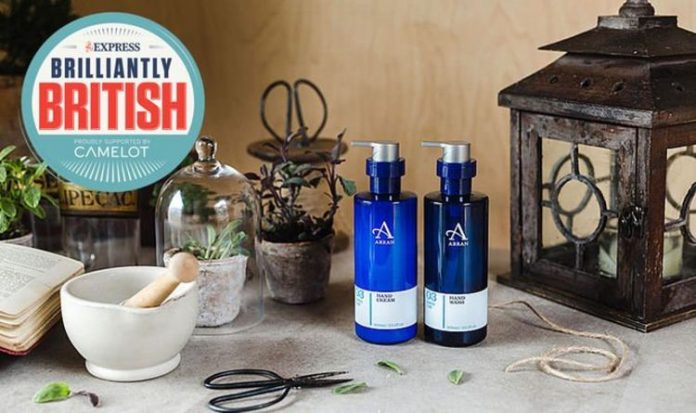 ARRAN SENSE OF SCOTLAND Inspired by the breathtaking scenery of the beautiful island off the west coast of Scotland, Arran Sense of Scotland sells luxury body and home fragrance products. Visitors are immediately immersed in the natural environment as they step off the ferry and now we can take a piece of it home with a single purchase from Arran. The family business started life 30 years ago and now employs more than 60 staff on the island and Scottish mainland. “The isle of Arran is not only home to our brand, but it also serves as the inspiration behind everything we do,” says CEO Kevin Meechan. “For over three decades, we’ve been creating vibrant, evocative scents from our Home Farm factory, an old dairy farm for the historic Brodick Castle.” The original Arran store still trades today and has recently won the 2020 Tripadvisor Travellers’ Choice Award for Attractions. “We’ve grown significantly since we began as a small, family soap business, but we’ve held true to our island heritage,” says Kevin. “We strive to use the highest quality ingredients, including water sourced from our island home which is filtered to remove any impurities before they are added into our collections.”

Using her prized 1930s Singer sewing machine and bags of raw talent, Poppy Treffry has won over a loyal online fanbase with her quirky hand-sewn gifts made in Cornwall.

“Each of our products tells a story and puts a spring in your step,” says Poppy.

“Any new products have to pass the ‘Is this quirky?’ test before they get approved.”With a team of local workers, Poppy makes her purses, bags, tea towels and stationary using sketches and scenes inspired by everyday life.Matilda the mermaid is a popular design but her skilled workers also produce personalised framed pictures.As well as looking good, they have a solid practical use.

The roll-up pencil or brush case with a wild flower design is ideal for sticking in a bag for those who enjoy a walk with a sketchpad.

The private member club’s chef has released a book that lifts the lid on the restaurant’s secrets (Image: 67 Pall Mall)

Most of the cuisine secrets of London private member’s club 67 Pall Mall have not been shared with the wider world – until now.

Executive chef Marcus Verberne and head of wine Ronan Sayburn have pulled off a Christmas cracker by releasing a book that lifts the lid on the club’s esteemed secrets called Wine And Food: The Perfect Match.

In the first half of the book, Ronan informs readers about the mysteries of terroir, revealing the world’s best grapes, where they grow and why they taste as they do.

This is followed by 100 dishes created by Marcus. These include the club’s signature Scotch Burford brown egg and its renowned saffron-poached apricot and almond tart.

The Queen’s Tea Ball was inspired by Nick’s commission to design a teapot for Her Majesty’s Jubilee (Image: Nick Monro)

Designed by Nick Munro, and manufactured in the UK by British pewter maker AE Williams, the ‘Queen’s Tea Ball’ and matching spoon were inspired by Nick‘s commission to design a teapot for the Queen’s Diamond Jubilee in 2013.

His original creation, featuring diamonds embedded into the gold crown, sits in a glass case in Buckingham Palace for all to see, though none to touch.

But now anyone can buy a small tea ball and spoon based on the multi-award-winning British engineer and artist’s design, a perfect gift for royal fans.

Nick says: “Working on the original design commission for the Queen was the rarest privilege, and working with the skilful teapot craftsmen in Sheffield was the truest joy.

“I wanted to bring the celebration of the original and that fantastic period further into people’s homes and that is how The Queen’s Tea range came to fruition.”

Gourmet popcorn is all the rage and Joe & Seph‘s air-popped treats use natural ingredients such as Belgian chocolate, fresh butter and cinnamon for lip-smacking flavours.

“It was only after months of experimenting that I settled on a unique ‘flavour sequencing’ process, allowing me to lock in flavours so that they flourished on the palate at different intervals as you munch,” says its founder Joseph Sopher.

It all started after a trip to the United States in which he discovered a variety of popcorn flavours unlike anything at home.He brought back as much as he could pack before trying to replicate the idea on British soil.

Joe & Seph’s popcorn has 67 Great Taste Awards to its name and is made in small batches by Joseph and a small team of skilled pastry chefs in London.

It’s a perfect stocking filler to enjoy with your Christmas movies.

Sleek and contemporary, Wilde & Harte‘s Osterley Mach3 razor is the perfect gift for wet shave devotees, gliding smoothly across the face for a clean finish.

Made from stainless steel and an optimum weighted handle, the elegant design is compatible with the Gillette Mach3® cartridge system and comes in a luxury gift box with a two-year guarantee.

No Christmas dinner would be complete without a well-stocked cheese board and for the past 17 years, the Cheddar Gorge Cheese Company has produced some of Britain’s best.

Located in the heart of Somerset, owners Katherine and John Spencer use traditional methods to produce the only cheese currently made in Cheddar.

“Keeping local tradition and craftsmanship alive is part of what makes Somerset so special,” he says.

For an extra-special gift, try a wedge of the Cave Matured Cheddar, matured over 12 months in near-perfect temperature conditions for a tangy taste.

Pry your children with a gift subscriptions the storytelling magazine Scoop (Image: Scoop)

Pry your grandchildren away from the TV with a gift subscription to the award-winning children’s storytelling magazine Scoop.

Every issue is packed full of stories, articles, games and activities geared around a particular theme.

Editor-in-chief and mother Clementine Macmillan-Scott set the magazine up in 2016 when she was inspired by reading a newspaper for children from 1932, giving it a vintage feel with a 21st-century slant.

Founder of Love Cocoa James Cadbury is the great-great-great grandson of John Cadbury who formed the world-famous British chocolate company nearly 200 years ago.

Inspired by his relative’s legacy to create something “absolutely pure, thereby the best”, he set up Love Cocoa in 2016 using superior cacao sourced from South America.

Most of the cocoa is sustainably sourced from family-owned suppliers in Colombia and Peru.

It is palm oil free with 100 per cent recyclable packaging and each purchase supports Love Cocoa’s plant a tree project to plant 500,000 trees.

Interior designer Caroline Lomax transformed her love of relaxation into a product range celebrating the art of lounging.

Her stylish array of electronic tablet and phone holders use a unique solution-dyed acrylic fabric that is 100 per cent weather and stain proof.

Caroline says: “When sitting and relaxing, it can prove difficult to balance an electronic tablet.

Our tablet holder perfectly cradles your device whether you are reading a kindle or watching a film in front of the fireplace and can be moulded into any position for the ideal tilt or height.”

Traditional leather bags from the Cambridge Satchel Company are coveted around the world and have swung from the shoulders of celebrity fashionistas Taylor Swift, Sophie Ellis-Bextor and Alexa Chung.

Cambridge mum-of-two Julie Deane started the company in 2008 with £600 to her name and the single aim of sending her eight-year-old daughter, who was being bullied at school, to a fee-paying one.

Inspired by schooldays of the past, she gambled on the idea of making unisex satchels.

Within a year they were featured in ItalianVogue and have since been spotted on many fashion front rows.

Julie, who was appointed an OBE for her services to entrepreneurship in 2014, is dedicated to supporting British craftsmanship and preserving trade skills. Her bags are available in a range of colours and sizes.

Do you have a favourite shop, restaurant or business? If it excels, we want to hear about it. Go to www.express.co.uk/nominate and tell us why it deserves to be recognised as Brilliantly British.

Entrusting his 14-year-old son Norman to “make this the best sweet shop in town”, Joseph continued with his day job while his boy created a cocoa empire.Thorntons is now Britain’s largest chocolate maker but the company still sticks to its ethos of using the best cocoa beans to create its dark, milk and white selections.

“We put a lot of love and craftsmanship into making our chocolate,” she says.

“Our vanilla truffles are delicately handfinished in our factory to achieve that high-quality personal touch.We pride ourselves on having chocolate that brings a distinctive and captivating sensation to the taste buds.

“With stores and cafes now reopened, the retail team can continue its commitment to supplying food banks and the charity Foodshare, which delivers surplus food to vulnerable people with Thorntons products.