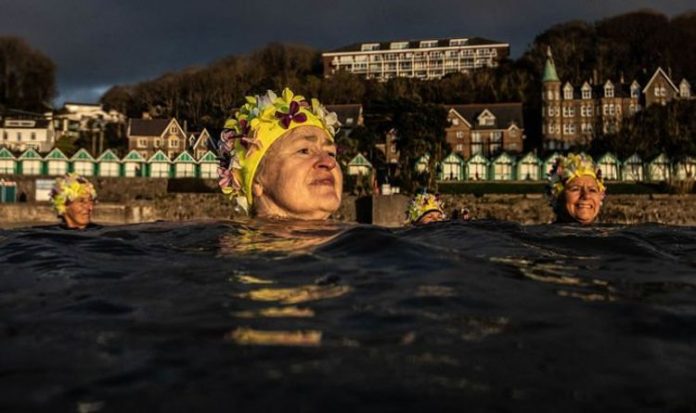 Swimmers grimace in the freezing sea, their heads illuminated golden yellow by the dawn light. A trader stands to attention by his tiny cafe, a converted red telephone booth, ready to serve passing shoppers. And a female cyclist in a face-covering passes an inner-city mural of a young woman wearing a mask.

While each of these photographs may tell a different story, they all encapsulate the resolution and determination of the great British spirit in 2020, one of our darkest years on record.

And that is why the Daily Express is today delighted to announce them as the three winners of our Brilliantly British Photograph Competition.

Launched last month, the nationwide contest ran side by side with our 14-day campaign of the same name in which we asked the nation to buy British-made goods to boost the economy and save jobs.

We called for photographs that captured unity and positivity through the lens of an amateur’s eye to highlight our inclusive, modern nation today.

“They were all high calibre with pictures that were both touching and amusing – and very British,” says Twiggy, whose own globe-trotting life has been exhibited in pictures at a national art gallery.

“As judges, we all recognised how a great photograph captures a moment in time, forever, and therefore must be important in a historical sense as well as artistic expression,” she says.

With this consideration, first place was awarded to Joann Randles, 32, from Swansea for her shot of senior open-water bathers taking a sunrise dip in the icy coastal waters off the town’s bay.

V&A director Tristram says: “I love the light reflected on the water which gives such a generous glow to the lady swimmers.

“The superb bathing hats and absence of goggles, the gritted teeth and hardy strokes, as the storm clouds gather above the old-fashioned beach huts – it captures a lovely moment of community, restoration, connection with the natural world, and style.”

Mike Moore, a three-time winner of the British Press Photographer during his 30-year career, says Joann’s picture combined “great British eccentricity” with the social distancing that signified the current times.

He reserved special praise for the image’s lighting and composition. “Everything was balanced and the low level looking across the water made it unique,” Mike says.

“It’s not easy to achieve a shot like that when you’re in freezing cold water like the photographer was. I was full of admiration for her.”

When the Express called Joann to inform her of her win, she broke down in tears of joy and astonishment.

“It’s the confidence boost I really needed,” she said. “It’s a phenomenal lift.”

The self-taught hobby photographer is a television digital video producer by trade but the pandemic saw her work projects practically all dry up last year.

“My confidence hit an all-time low,” she says.

Her fiancé bought her a digital single-lens reflex camera and encouraged her to take her photography “more seriously” – but she never expected to win.

Her winning photo will be displayed at the V&A Museum this year and printed in eight sister regional titles of the Daily Express including the Manchester Evening News, Liverpool Echo and Birmingham Mail.

She also won an iPhone12.

It features Faz who with his friend, Nizam, rented two red telephone boxes in Bradford and converted them into lunch booths, complete with a table and chair for customers, selling drinks, traditional Asian and British snacks and confectionery.

“The photograph encapsulates and celebrates our unique British identity through the reinvention of one of our most cultural icons – the red telephone box,” Shobna says.

“Like the famous Tardis of Doctor Who, this chameleon-like kiosk has been reimagined as a food cafe becoming a meeting place of cultures and conversations in the process. What’s not to love?”

Third place went to Graham Long, 52, a council officer behind the masked cyclist shot in Shoreditch’s Brick Lane in London, above.

“There is melancholy and beauty in this photograph, and a sense of timelessness: the cyclist travels through the deserted streets of London, as the ever-present pandemic keeps watch,” says Tristam.

“There is also heroism in the cyclist who is trying to keep going amid all the extraordinary pressures we have suffered over the last year.”

Other shortlisted pictures featured a man who helped a frail pensioner to safely cross the road and a couple on a deserted beach in deckchairs determined to read their newspapers despite the ominous dark clouds above.

“The standout feature of every single submitted picture was that it reflected in some way how everyone has been dealing with the pandemic and lockdowns,” says Mike.

“People used photography to reflect what had been happening in their lives, whether it been in their home, their street, or when they’ve been out exercising.”

Twiggy’s favourite was Carefree in which a small toddler splashes through a puddle of water in his wellies. “It made me smile and feel hopeful for the future in these difficult times,” she says. “It’s also a great shot that captures the simple happiness of a child.”

That feeling of hope is shared by Kwame Kwei-Armah, the Young Vic’s artistic director. “Each photograph gave me a fresh insight into the Britain of 2020, and possibly beyond,” he says. “They are beautiful to behold.”

What our Photographers said about their pictures

“What could be more British than these brave, brilliant retired ladies, aged 60 and over, celebrating their sixth anniversary as an open water swimming group in the bitterly cold winter sea. The Rother Bobbers, embody positivity and defy their age by swimming every Thursday at 8am, and all year round, in no more than a swimsuit.”

“Faz and his friend, Nizam, rented two red telephone boxes in Bradford and converted them into lunch booths, selling drinks, traditional Asian & British snacks and confectionery. It was a brave move, given the stringent Covid-19 restrictions in place, and a testament to the spirit of the people of Bradford.”

READ  Did you notice a change in nan or grandad's hearing this Christmas? This could be why | UK | News (Reports)

Third place: Lockdown in the City by Graham Long

“This is during the summer lockdown in Shoreditch when we were all told to wear a mask, not use public transport and get on our bikes. A hipster girl rode past the graffiti of a face mask, wearing her own – it summed it all up.”

“The moment, during Covid restrictions, when two mothers were allowed to be grandmothers and mothers at the same time.”

“A great example of the British spirit, you can just imagine what this British couple is thinking: ‘I don’t care if it’s raining, I’m going to sit on the beach, read my paper and have a cuppa!’”

Light at the End of the Tunnel by Angie Breen

“Sunrise in the North Yorkshire seaside town of Filey. Light at the end of a long, dark tunnel.”

Light at the End of the Tunnel (Image: Angie Breen)

In Kilburn High Road, north London, one of the most diverse and tolerant UK communities, a man helps another man cross the busy road with care and tenderness. One is white and frail, the other black and vigorous; what matters is the tenderness.

Is it Safe to Come Out Yet? by Laura Kolbach

Two expressions that simply describe this year  – is it safe to come out yet?

Is it Safe to Come Out Yet? (Image: Laura Kolbach)

My daughter, Hope, and her pug, Frank, here sum up our modern Britain. I never imagined for a second I would be homeschooling my daughter over this past year but I have loved every second of our journey.

“In a time of trouble, children are blissfully unaware of the turmoil that is going on. Long may it continue.”