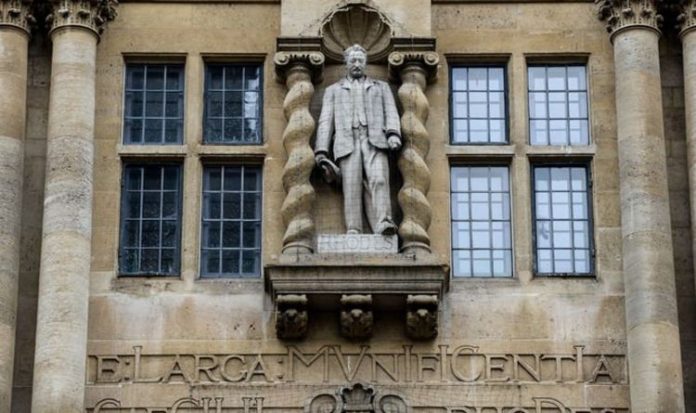 Tories have made a new bid to save the Cecil Rhodes statue in Oxford which the governors of Oriel College have voted to remove. They warn a “smothering” of troubling chapters in British history could stop us learning the lessons of the past and result in a “less equal and less informed modern Britain”. A commission on the future of the statue to the politician, mining magnate and philanthropist will report in the coming months.

An Oxford don, who wished to remain anonymous, told the Sunday Express: “[A] culture of ideological conformity has intensified in the university. Young academics fear for their careers.”

In making the case against the removal of the statue and a nearby plaque, Rother Valley Conservative MP Alexander Stafford and colleagues including former security minister Sir John Hayes acknowledge Britain’s history contains “dark misdeeds which must never be repeated”.

They argue: “The colonisation of southern Africa is one such chapter. This is exactly why it is so important that the statue and plaque of Cecil Rhodes are maintained in some form to educate future generations of our past.

“The statue and plaque should not glorify Rhodes but with additional contextual information should serve as an historical record of his actions. If we erase and deny our history, we condemn ourselves to dangerous ignorance.

“It is of the utmost importance that in a free and open society, we can examine our chequered past, warts and all, in order to build a better future.”

They say there are “better ways to commemorate those who suffered from colonialism than removing evidence of its existence”.

Opponents of tearing down statues won a victory this month when the Government announced legal safeguards for monuments at risk of removal. The new policy means statues should be “retained and explained” for future generations.

In a letter to Culture Secretary Oliver Dowden, Mr Stafford and 14 fellow parliamentarians state that the “very fabric” of Oxford and cities such as London, Bristol, Manchester and Glasgow is “interwoven with the legacy of controversial historical figures”.

They write: “The presence of these figures in our towns and in our institutions presents us with an important educational opportunity: we can use them to become more conscious of our past and to build a better society. If we cave to pressure from the radical left, we fear that the smothering of our past will lead to a less equal and less informed modern Britain.”

Rhodes’s sponsorship of international academic scholarships did not stop protesters demanding the toppling of his statue, but the anonymous Oxford academic suggested students might be disturbed if they examined present sources of higher education funding.

The source said: “From the beginning of their history the universities of Oxford and Cambridge have been money-laundering schemes. Medieval robber-barons founded colleges to pray for them and smooth things over with God.

“That tradition is going strong. Students who looked closely at the sources of money currently flowing into their colleges today may be ‘uncomfortable’ with what they find.”

A spokeswoman for Oriel College’s commission said: “[We] received a considerable volume of submissions which, together with the limitations imposed by operating during a pandemic, means the report will likely be published in early spring 2021 in order to ensure that all input is given careful and due consideration.”