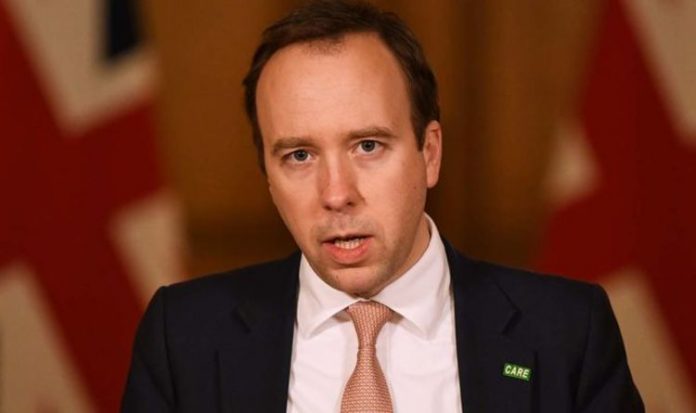 Matt Hancock: Over 100 cases of new variant in the UK

It has secured 40 million more doses of the Valneva vaccine. That means the UK will have more than enough for this year with doses lined up until 2025 as part of a potential yearly ­vaccination programme. Health Secretary Matt Hancock praised strong investment in manufacturing sites across Britain which will ensure the ­continued supply.

He said: “We didn’t start this pandemic with a large scale, onshore vaccine manufacturing capability – so we’re building one, all across the United Kingdom. And the vaccine

programme just goes to show how important it is, the whole UK working as one, together.”

The Valneva jab will be manufactured at a plant in Livingston, West Lothian, which will have the capacity to churn out 250 million doses a year for use around the world.

The Novavax one will be made in Teesside, while the Oxford/AstraZeneca vaccine is being made in Oxford, Staffordshire and Wrexham.

Asked about supplies of vaccines following disputes with the EU, Mr Hancock said: “We have a high degree of confidence in the supplies that we have contracted from Pfizer and AstraZeneca and we’re working with our European partners to make sure those supply chains can remain open.

“And in the same way that there are some of the supplies made on the continent, so too a huge amount of it is made here in the UK.”

Mr Hancock said “constructive progress” had been made with the EU over the weekend, adding: “Following those decisions by the EU, I’m confident that we will be able to deliver supplies to everyone who needs it for their second dose.

“This is obviously something we keep a very close eye on.”

The latest vaccine update came as the number of new daily Covid-19 cases fell to the lowest level since December 15.

A total of 100 million doses have now been ordered from French pharmaceutical firm Valneva (Image: Getty )

Almost 9.3 million Britons have now received their first dose and more than 494,000 have received the second.

One in every 60 adults was vaccinated at the weekend alone, with 931,000 jabs delivered on Saturday and Sunday.

Almost nine in 10 over-80s and more than half of those in their 70s have received an inoculation.

The total of more than 400 million vaccines now on order is enough for every person in the UK to have six, offering flexibility in case people need to be revaccinated next winter.

Prime Minister Boris Johnson got a first hand look at the work being done yesterday as he visited a vaccination centre in Batley, West Yorkshire.

Valneva’s vaccine is expected to be given in two doses (Image: Getty)

Mr Hancock said that while he was delighted with progress at home, the UK would also be “generous around the world”.

He said: “One of the many reasons that I’m so happy with the AstraZeneca contract is that it not just gives us a strong supply here, but because it is the only vaccine currently being deployed that is available to the whole world at cost.

“We will protect UK supply and we will play our part to ensure the whole world can get the jab.”

A total of 100 million doses have now been ordered from French pharmaceutical firm Valneva, matching the number secured from Oxford/AstraZeneca.

The first batch of 60 million from Valneva will be delivered this year if the jab is approved by regulators, and the rest in 2022. The Government has also retained options over a further 90 million doses for supply between 2023 and 2025.

Valneva said the total value of the entire order was up to £1.2billion.

Business Secretary Kwasi Kwarteng said: “This latest deal is yet another weapon in our national arsenal against this terrible disease, and will ensure we have sufficient supplies to protect the British public in 2021 and beyond.

“Backed with major investment from the UK Government, Valneva’s site in Scotland will be a vaccine production ­powerhouse, working flat out to ensure we can quickly deploy jabs across the UK if their ­candidate is approved.

“Thanks to our incredible UK Vaccine Taskforce, we have now secured a bumper portfolio of over 400 million vaccines, putting our country in an exceptionally strong position to defeat this virus once and for all.”

Valneva’s vaccine is expected to be given in two doses and phase one and two trials are due to report within the next three months.