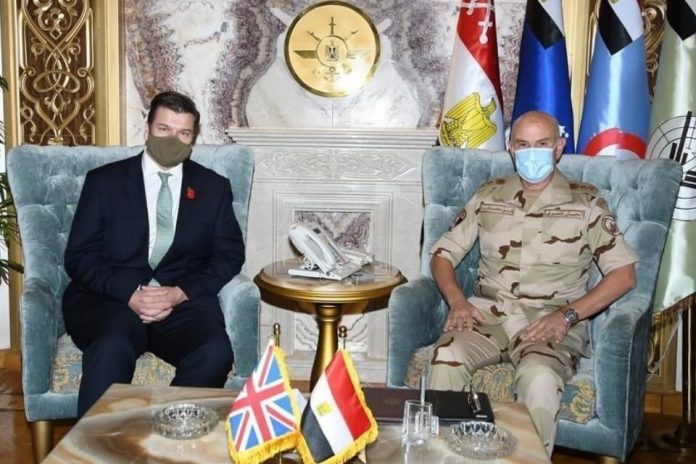 UK Minister for the Armed Forces James Heappey MP met with Chief of Staff of the Egyptian Armed Forces Lieutenant General Mohamed Farid to discuss ways to boost British-Egyptian defence cooperation. The meeting came as a part of the Minister’s current official visit to Egypt.

The two sides discussed the latest military developments in Libya and in the Eastern Mediterranean region. The war on terrorism and opportunities for joint exercises were also discussed in the meeting. British Ambassador to Egypt Sir Geoffrey Adams and British Defence Attaché Captain (Royal Navy) Stephen Deacon accompanied the Minister.

The visit is considered the second significant visit for a senior Defence Minister following the successful visit to Egypt of the Former Minister of State for the UK Armed Forces in June 2019.

I was delighted to meet with Lieutenant General Mohamed Farid to discuss how we might further deepen our existing partnership and cooperation. There are shared challenges the UK and Egypt can work together to address: ensuring that a ceasefire holds in Libya, and provides a chance for peace, and combatting the scourge of terrorism. This is exactly what we need: an exchange of ideas, experience and capability between our two countries. I look forward to further developments in future.

This visit by our Minister for the Armed Forces is a clear sign of the importance the UK places on bilateral defence cooperation between our two countries. The UK is ready to enhance our partnership with our Egyptian friends and counterparts, working together to face shared challenges with agility, expertise and strategic focus on the issues that matter.