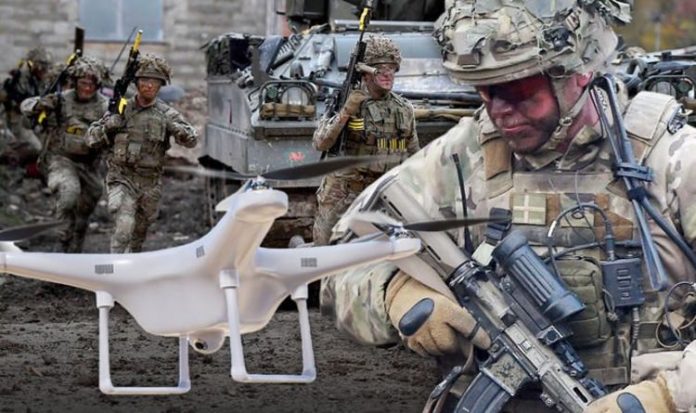 The new weapon which measures about a metre in length is set to be used in urban conflicts. Equipped with twin stabilised shotguns which could be interchangeable with a rocket or a chain gun in the future. The armed drone came about as British commanders predicted that more battles would be fought in cities, which would pose an added risk to troops.

The weapon, the military’s first drone to have the ability to fly inside, is operated remotely by personnel.

Fitted with six rotors, the equipment uses a combination of physics and AI to stay in the air in small rooms.

The Army’s latest development has the power to overcome “wall suck” which can cause drones with heavy payloads to crash due to the way they displace air in small confined indoor spaces.

It also features a camera and “machine vision” similar to the system used in driverless cars.

This will identify people and objects in urban settings.

Indoor flying presents a range of challenges for pilots as drones are susceptible to interference from WiFi, Bluetooth and FM radio.

A single person on the ground controls the Ghost 4 as it carries out its search mission.

He said the equipment could also carry infrared lasers to direct weapons at a specified target.

Mr Luckey also said “it would be possible” for the Ghost 4 to be fitted with weapons.

He added: “But nobody’s done it yet.”

A recent test-drive of the drones in California saw them scour an area of wilderness for hours on end.

They sought out missiles – props which had been hidden on the ground.

The Ghost 4 is the latest product from Anduril, a defence-friendly tech company founded by Mr Luckey.

Last week it emerged the firm had been offered a multi-million dollar contract with the US Air Force for work on a cutting-edge nervous system for war.