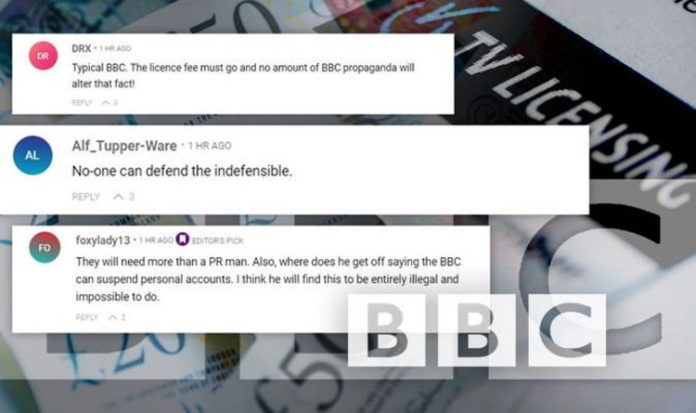 The new PR executive is being drafted in to lead the broadcaster’s corporate and public affairs strategy to try to halt the number of people opting to go without a licence. They will also report directly to the director-general Tim Davie who took up the role last month, taking over from Lord Tony Hall.

They will be expected to use their position to build links with MPs and lobby them on the importance of a reasonable and sustainable licence fee.

But exasperated viewers were outraged at what they view as another waste of licence fee money at a time when the BBC is promising to make savings.

One Express.co.uk reader said: “If the viewers love the BBC so much, the corporation has no need for a PR executive.

“Another waste of money paid for by the viewing public.”

Another said: “As predicted Tim Davie is another establishment stooge who spouts hot air.”

Another said: “Convincing the licence payer is more important than hobnobbing with MPs.

“If we refuse to buy a licence, the BBC will lose their income.

“They can arrange what they like, we can refuse to buy into their Ponzi con.”

Another outraged reader said: “Typical BBC. The licence fee must go and no amount of BBC propaganda will alter that fact!”

And another felt the new PR chief would face a tough challenge.

He said: “No-one can defend the indefensible.”

According to PR Week, the new role is needed to respond to the increased level of scrutiny over the BBC’s content and uproar over the removal of the free over-75 licence.

The corporation is looking for someone who is an “excellent communicator”.

The BBC said: “We need someone to respond confidently to scrutiny and engage stakeholders with its vision for the future of public service broadcasting.”