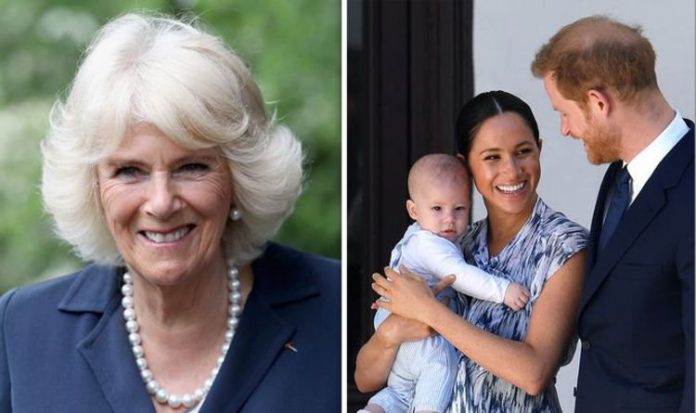 The Duke and Duchess of Sussex recently announced that they are expecting their second child this year. Once again, there are excited discussions about what the baby may be called, with Diana at 6/1 as many think Harry will choose to honour his mother if the child is a girl. In contrast, Harry’s step-mother Camilla, Duchess of Cornwall is very unlikely to get a mention, according to entertainment reporter Ashley Pearson.

Ms Pearson reflected on the names that were floating around before Archie’s birth in the 2020 Amazon Prime documentary ‘Meghan Markle: Changing Traditions’.

The royal commentator said she believes the name Diana was definitely on their radar and is very likely to be chosen if Meghan and Harry have a girl in the future.

She said: “In the lead up to the birth, Harry and Meghan both said they didn’t want to know the sex ‒ they wanted it to be a surprise.

“So they obviously had to choose both boy and girl names.

READ MORE: Harry told to ‘get used to rejection’ if Meghan decided on home birth

Camilla was “not in the mix” for Meghan and Harry’s baby (Image: GETTY)

“Had it been a girl, Diana was very much a favourite name and I believe it was very likely that Diana would have been the first name or at least in the middle of that long name.

“And the reason is, you know, from the beginning both Harry and William both have included their mother wherever possible in their relationship and I think it grieves them both that she wasn’t there when they married, she wasn’t there to see her grandchildren

“We knew it wasn’t going to be Camilla, we knew there was definitely not a Camilla in the mix for girls’ names.

“But it was very very likely and I think in future should they have a daughter it will very, very likely be named Diana.”

It is perhaps not surprising that Camilla was not considered, given her history with Diana.

While in recent years, Harry has developed a warm relationship with his stepmother, there is the awkward fact that Camilla’s affair with his father Prince Charles was a major reason for the breakdown of his parents’ marriage.

It also contributed towards Diana’s emotional pain and ill-health and embarrassed their whole family when the story came out.

Both Harry and William are known to adore and respect their mother, and desperately want to keep her legacy alive.

Ms Pearson added that, in terms of boys’ names, they discussed Philip and Charles after Harry’s father and grandfather, as well as names with royal connotations such as Arthur and Alexander.

She said: “In terms of boys names there were a lot of names initially floated around they were all connected with royal tradition but not typically traditional.

“Some of the names that had been tossed around by the royal couple were believed to be Philip ‒ of course after Prince Philip, who is very close with Harry ‒ Charles, honouring Prince Charles who we know walked Meghan down the aisle and has been a constant support to her.

“And also we heard Alexander, we heard Arthur, which are both royal names but not necessarily as common.”

It is still unknown what Harry’s cousin Princess Eugenie and her husband Jack Brooksbank are naming their son, who was born at The Portland Hospital last week.

Betfair odds from Thursday listed Philip as the favourite at 10/3, Oliver in second place at 4/1 and Arthur in 3rd at 4/1.

Of these, Philip, Henry and Edward have clear links to Eugenie’s relatives ‒ her grandfather the Duke of Edinburgh, cousin Prince Harry and great-uncle Prince Edward, as well as her great-great-great-great grandfather King Edward VII.

The Queen and Philip are said to be “delighted” at Eugenie’s news, as are her parents Prince Andrew and Sarah Ferguson.

The new parents are expected to “bubble” with the Duke and Duchess of York, who live around the corner from Frogmore Cottage in Windsor.