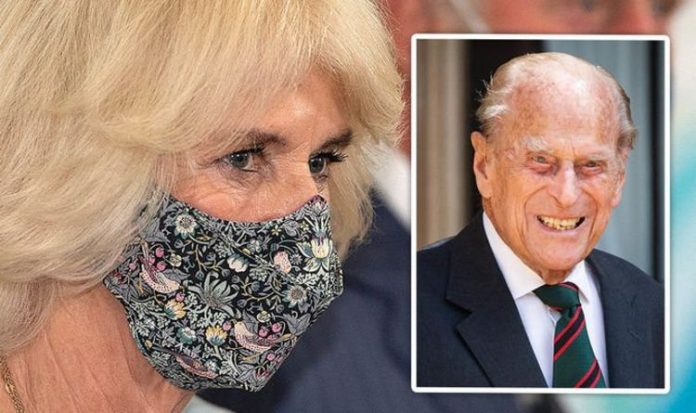 Camilla joined Prince Charles for a poignant engagement at the Bank of England in central London. While there, the royals were asked to sign a £1million note instead of a guestbook, as it is customary for members of the Royal Family when they visit the central bank.

Looking at the big note, usually kept in the vault, Camilla said: “So, I can’t pop it into my handbag?”

Prince Philip had made a similar joke in 2012, during one of his visits to the Bank of England alongside the Queen.

As he waited for his turn to sign the unissued note, the Duke of Edinburgh said: “Is this just lying about? You won’t miss it, will you?”

Camilla’s joke was welcomed by Twitter users, with one, Grant, saying: “The Duchess of Cornwall is warm and very witty”.

Another, Seti, also said: “I have always thought Camilla has a pretty good sense of humour.”

And a third, Lady K, added: “You gotta love Camilla!”

Camilla and Prince Charles headed to the Bank of England yesterday to hear how it is coping with the coronavirus pandemic.

While at the Bank, the couple spoke to employees who are involved with its education programmes as well as the design of notes.

Charles and Camilla also had the chance to take a look at the Bank’s redesigned £50 note.

Later during their visit, they took part in a virtual summit with bank tellers across the country.

Both royals wore face coverings during their visit.

Camilla opted for a mask with a blue background and an intricate floral pattern based on an original artwork by William Morris.

Prince Charles on the other hand silently backed one of his charity through his face covering.

The Prince of Wales wore a turquoise silk mask made by Turquoise Mountain, an organisation he has been supporting since 2006.

This charity works with artisans to preserve their traditional crafts and provide youngsters with job training.

Upon the beginning of the pandemic, Turquoise Mountain has partnered up with weavers and seamstresses in Myanmar to make face masks using traditional fabrics.

While carried out in exceptional times, yesterday’s royal visit to the bank was not a rare one.

Members of the Royal Family traditionally visit the Bank of England.

The Queen first visited it when she was just a child.

Aged 11, she accompanied her grandmother Queen Mary to the engagement – during which, despite her age, she was also asked to sign the £1m note.

During her engagement there in 2012, the monarch spotted her signature made in 1937.

She joked: “It hasn’t improved, really.”