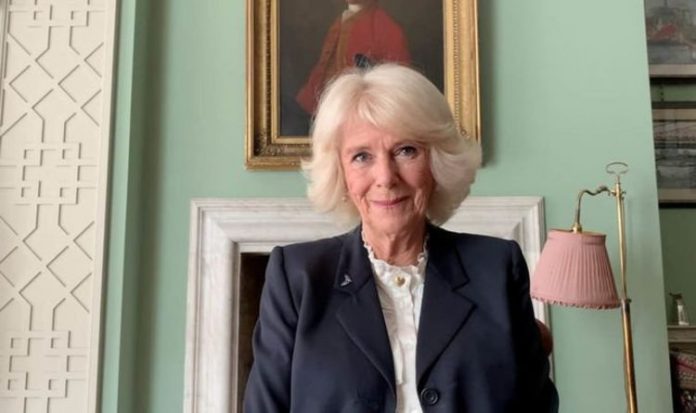 Camilla recalled the “terrible pain” her mother, Rosalind Shand, suffered before dying from the fragile bone disease. The Duchess said in an emotional video: “In those dark old days it was seldom discussed, rarely diagnosed and usually attributed to old women with so-called ‘dowager’s humps’.

“My family and I knew nothing about it and were at a loss to know how we could help alleviate the terrible pain she suffered.”

Addressing osteoporosis as a “silent” disease, Camilla commended the progress made by scientists and researchers, who today can help those who suffer from it in much better ways than in the 1990s, when her mother died.

She continued: “But how times have changed – today huge strides have been made in the treatment and research into osteoporosis, and we now know how it can be prevented and how we can support those who are living with it.”

Camilla noted it is important to stay as active as possible, even during a pandemic, to keep bones healthy.

Camilla is the president of the Royal Osteoporosis Society (Image: ROYAL OSTEOPOROSIS SOCIETY)

She said: “We know it is vital to eat the right food, to take regular and weight- bearing exercise and, so importantly, to educate young people as to how to look after their bone health.

“For those living with osteoporosis, there is now, thankfully, a wide range of treatments available to slow bone loss and increase bone mass.

“We are lucky to have brilliant charities all over the world offering practical and emotional help.”

The Duchess has been the proud president of the Royal Osteoporosis Society for decades.

In 1997, she became its patron as Camilla Parker Bowles.

In 2001, four years before marrying Prince Charles and officially joining the Royal Family, she became the organisation’s president.

Today, the Duchess is hosting a tea at Clarence House dedicated to representatives and supporters of the Royal Osteoporosis Society.

Craig Jones, the charity’s chief executive, said: “We warmly welcome this message of support from Her Royal Highness the Duchess of Cornwall.

“Osteoporosis affects 3.5 million in the UK but is much less well understood than other major health conditions.

“Crucially, the health of your bones can be improved throughout life by a healthy diet, regular exercise and vitamin D.”

Camilla had often spoken about the importance of physical activities.

At the height of lockdown, when she was staying with Prince Charles at their Scottish home in Birkhall, the Duchess confessed she was following online dancing classes.

During a video call with Darcey Bussell and Angela Rippon, Camilla said she has attended for more than one year the Royal Academy of Dance Silver Swans classes, dance courses designed for the elderly.

And, the royal added, the coronavirus pandemic had not stopped her from attending her weekly dance class, as she joined in regularly virtual sessions.

Camilla, who in April became the new vice-patron of the Royal Academy of Dance, opened up on her exercise regime.

She said: “I do a combination of a bit of Silver Swans and a bit of Pilates and a lot of walking which I love.

“We’ve all got to keep active.

“If we don’t we’ll seize up and won’t be able to get out of bed in the morning.”

Joking about her dancing skills, the Duchess added: “I’m very, very much a beginner and probably will always remain a beginner, but I do feel after a year, or 18 months, of doing it that maybe I’ve improved a tiny bit.

“But I’m certainly not going to be taking to the stage.

“I shall keep it in my own home very privately.”