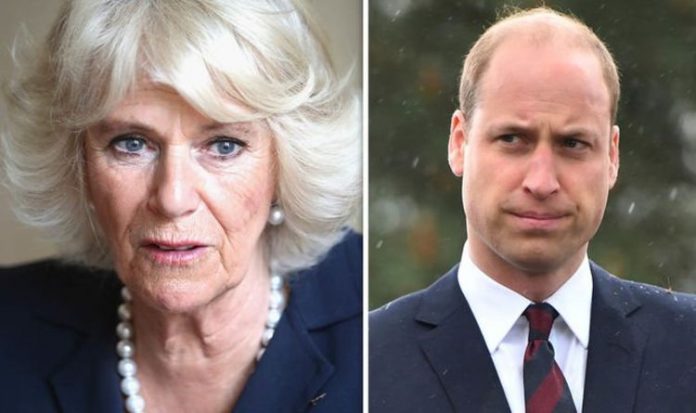 Prince William was keen to acknowledge the relationship between Camilla and his father Prince Charles just months after the death of his beloved mother, royal expert Robert Lacey said. The now-Duke of Cambridge was only 15 when he first decided to meet Camilla.

As recalled by the royal expert, the teenager surprised his father and the then-Mrs Parker Bowles in the summer of 1998, when he casually informed Prince Charles he was travelling from Eton London to see a few friends knowing he would find him in the company of Camilla.

Mr Lacey, author of Battle of Brothers, recalled Camilla’s first reaction to the news she would meet within just hours the second-in-line to the throne.

He wrote: “Her first instinct was to bolt when Charles told her that Wills was on the way.

“But she powdered her nose, put on a brave face and smilingly bobbed William a curtsy.”

Camilla was left ‘trembling like a leaf’ after her first meeting with Prince William (Image: GETTY)

The meeting went smoothly, according to Camilla’s own recollection of the events.

Yet, meeting Diana’s firstborn with such short notice at a time she and Prince Charles were still keeping their relationship a secret had an impact on the future Duchess.

Mr Lacey said: “It was William who led the conversation, Camilla recalled, trying to put her at ease with Gloucestershire talk of horses, the hunt and polo.

“How was Tom (her son who was also Charles’s godson) getting along since leaving Oxford?

Camilla and Prince Charles met in the 1970s (Image: GETTY)

“After half an hour of the professional chit-chat in which the prince was already quite practised, the ever-composed teenager made his excuses and left for the movies.

“William appeared quite unruffled by the encounter – but the momentous meeting had left Camilla, by her own account, ‘trembling like a leaf’.”

Prince William had pragmatically decided a few months after the death of Princess Diana to make this meeting “his next priority” after realising the importance Camilla had in his father’s heart.

Camilla and Prince Charles on their wedding day (Image: GETTY)

Mr Lacey said: “The hard-headed and purposeful fifteen-year-old had realised that this woman whose his late mother, still only a few months in the grave, had hated with such a passion, now occupied a place at the heart of his father’s life.

“So like it or not, that put Camilla at the heart of his life as well.”

Mr Lacey wrote: “It was over tea again – this time at Highgrove a month or so later in the company of Tom and Laura Parker Bowles, Camilla’s two slightly older children, with whom William and Harry had already spent some time the previous Easter.

“Camilla would report that Diana’s younger son had looked at her ‘suspiciously’.

“But, as with William, the encounter seems to have piqued her own anxieties more than it did the laidback juvenile.

“‘Whatever makes you happy, Papa’ was the standard response of both Diana’s boys to Charles’s efforts to construct a new family circle around his now ever more present companion.”

Prince Charles and Camilla made their first public appearance as a couple in January 1999, one year and a half after the death of Princess Diana.

The pair were photographed leaving the Ritz Hotel in central London, where Camilla’s sister’s birthday party had taken place.

Prince William made meeting Camilla his priority in 1998 (Image: GETTY)

Both Prince Charles and Camilla smiled at photographers, who took pictures of them leaving the party together on the same car, signalling they were no longer hiding their relationship.

Eight months later, Camilla took part to a trip to Greece with Charles and his two sons, the BBC wrote at the time.

Charles and Camilla eventually moved into Clarence House together in 2003, one year after the death of the Queen Mother.

The pair married in April 2005 in a civil ceremony taking place at Windsor Guildhall.