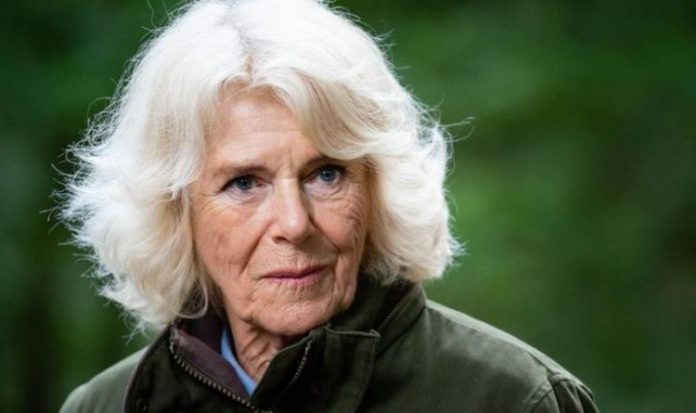 The fourth series of the fictionalised drama based on historical events including the love triangle of Prince Charles, Princess Diana and Camilla in the 1980s. The show depicts a lovelorn Diana as she desperately tries to make her doomed marriage work, despite Charles longing to be with Camilla instead of her. Netflix released the new series of The Crown just days before The Royal Family posted a picture of Camilla on Instagram as she attended a virtual prize-giving for the written entries of the 2020 Queen’s Commonwealth Essay competition, which had the theme “Climate Action and Commonwealth”.

Camilla was also quoted in the caption, as she said: “There have been 12,888 entries from young people across the Commonwealth: one of the most successful Competitions on record.

“I am incredibly proud of all of you for overcoming the year’s challenges with your outstanding creativity on this vitally important subject. Thank you for taking part.“

Despite the post receiving more than 62,000 likes, some of the 5,000 comments did not focus on the project and instead referenced the portrayal of Camilla in the Netflix show.

One person wrote: “Diana will always be my Queen, she deserves the love.”

Another added the post of Camilla was “bad timing”, as it coincided with the release of the latest series of the show.

They followed the post with a series of laughing emojis.

A third suggested Camilla should have married Charles before Diana so that the late princess could marry someone who “cherished her” instead.

They said: “Charles should have been allowed to marry Camilla in the first place.

His eldest son Prince William was the best man.

But the Queen did not attend the wedding.

However, she did go to the reception afterwards.

Camilla has faced controversy in the past after she was seen as one of the reasons why Charles’ first marriage with the late Princess Diana ended.

Charles first fell in love with Camilla in the 1970s, which was long before he was introduced to Diana.

It has been widely reported Her Majesty and her royal advisers were able to put a stop to the romance in the beginning.

However, the Queen and Camilla’s relationship appears to now be on better terms.

He said: “It was a slow burn. They obviously had to build their relationship.

“They both have a shared love of horses. They are both outdoorsy, both country ladies.”

Netflix has not commented on the backlash that Camilla has received following the fourth season of the Crown being released.