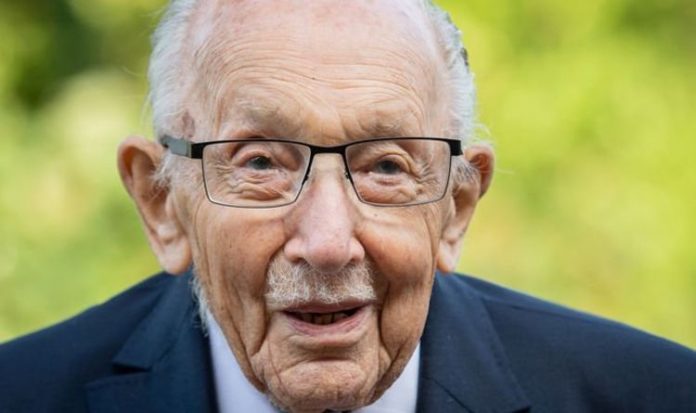 And in a military tribute, a Second World War-era plane will soar over the small family funeral service. A single bell at thousands of churches will be rung 100 times at noon for Captain Sir Tom, who died aged 100 on February 2 after contracting pneumonia and then Covid. Last year he raised £33million for the NHS after trying to raise £1,000 by walking 100 lengths of his garden.

His service will be attended by just eight family members – his two daughters, four grandchildren and sons-in-laws. The location has not been revealed to prevent large
numbers of well-wishers gathering.

A C-47 Dakota, part of the Battle of Britain Memorial Flight which operates from RAF Coningsby in Lincolnshire, will perform the flypast.

The family intend to intern Capt Sir Tom’s ashes in the family plot in his beloved home county of Yorkshire.

Daughters Hannah Ingram-Moore and Lucy Teixeira said Sir Tom asked for My Way by Frank Sinatra to be played at his funeral and that his epitaph read, “I told you I was old”, in reference to comic Spike Milligan’s epitaph, “I told you I was ill”.

They said: “Over the past year our father spoke openly about his death and his funeral and had wondered if perhaps the interest in him over the last 12 months would mean we would need more Victoria Sponge cakes. Sadly we have no choice but to hold a small family funeral.”

There are plans to plant trees n his honour, with Ms Teixeira hoping Trees for Tom will result in a Yorkshire wood and the reforestation of part of India, where he served during the war.

She said: “My sister and I have been creating the funeral my father wanted. He was very clear in his wishes and if he could have been put into a cardboard box he would have done that, rather than chop down a tree.”

● An online book of condolence is open at captaintom.org and his family requests donations are made to The Captain Tom Foundation, charities or for a tree to be planted in his memory.