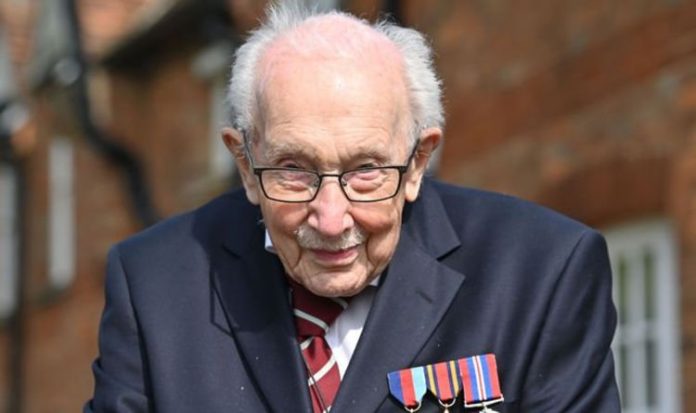 Captain Tom was taken to Bedford Hospital on Sunday after being treated for pneumonia and testing positive for coronavirus last week.

In a statement, his daughters Hannah and Lucy said: “It is with great sadness that we announce the death of our dear father, Captain Sir Tom Moore.

“We are so grateful that we were with him during the last hours of his life; Hannah, Benjie and Georgia by his bedside and Lucy on FaceTime.

“We spent hours chatting to him, reminiscing about our childhood and our wonderful mother. We shared laughter and tears together.

“The last year of our father’s life was nothing short of remarkable. He was rejuvenated and experienced things he’d only ever dreamed of.”

In total Captain Tom raised £32.7 million, with donations from 1.5 million supporters, before his fundraising page was closed at midnight following his 100th birthday on April 30.

To recognise his astonishing efforts, he was knighted by the Queen during a unique open-air ceremony at Windsor Castle in summer 2020.

Sir Tom spent the latter part of 2020 in Barbados with his family, and his fundraising efforts were marked during the New Years drone display in London, as his figure appeared over the O2 Arena.

Sir Tom’s family confirmed his illness on Sunday, saying he had needed additional help with his breathing and was being treated on a ward but not in ICU.

In a statement shared on Twitter, Liz Lees, chief nurse at Bedfordshire Hospitals NHS Foundation Trust said: “It has been our immense privilege to care for Captain Sir Tom Moore.

“We share our deepest condolences and sympathies with his family and loved ones at this incredibly sad time.

“We’d also like to say thank you, and pay tribute to Captain Sir Tom Moore for the remarkable contribution he has made to the NHS.”

Captain Tom had served in India during the Burma campaign in World War 2.

He later became an instructor in armoured warfare.

After the war, he worked as managing director of a concrete company and was an avid motorcycle racer.

He was born in Keighley, West Riding of Yorkshire, and married Pamela in January 1968.

The pair had two daughters, Lucy and Hannah.

Pamela died in 2006 after battling dementia, and Captain Tom went on to live with his daughter Hannah, her husband and their two children.