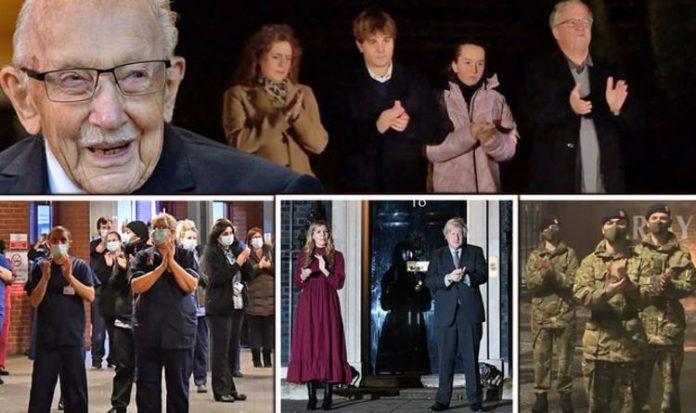 Britons took to their doorsteps to honour Captain Sir Tom Moore who died on Tuesday after testing positive for coronavirus. Prime Minister Boris Johnson had urged the public to join in the show of appreciation for the 100-year-old as well as health workers at 6pm on Wednesday evening. The House of Commons fell silent in tribute to Sir Tom ahead of Prime Minister’s Questions, and Mr Johnson told MPs the centenarian had dedicated his life to serving others.

His family said the last year of his life was “nothing short of remarkable”, and that he had “experienced things he’d only ever dreamed of”.

Health Secretary Matt Hancock said Captain Tom’s contribution – having raised more than £32 million for the NHS during the first coronavirus lockdown – will be formally marked.

Sir Tom set out to raise £1,000 for NHS Charities Together by walking 100 laps of his garden before his 100th birthday last April – but his efforts struck a chord with the nation and donations flooded in.

In acknowledgement of his fundraising, he was knighted by the Queen during a unique open-air ceremony at Windsor Castle in summer 2020.

The organiser of a clap for Captain Sir Tom Moore has said she “will make sure he is never forgotten”.

Hannah-Jayne King had initially set up a Facebook campaign to dedicate a round of applause to the veteran on Friday.

Ms King, from Cwmbran, south Wales, organised another clap for Sir Tom in April last year, which was observed by thousands across the world, and she runs a Facebook group called Clap for Colonel Tom which has more than 30,000 members.

Ms King has also raised money for the NHS with several tributes to Sir Tom, including the selling of memorial stickers – designed by Jessica Williams – and raffle tickets for a life-sized woodcarving of Sir Tom.

“He has left a positive stamp on the whole world, his legacy will live on. I will make sure he is never forgotten.”

Ms King also plans to open a temporary bar in her garden for her household on the day of Tom’s funeral to toast him, which she plans to name after him as “The Colonel’s Arms”.

She said she thought the “absolute world” of Sir Tom and feels the UK is now a “nation in mourning” following his death this week.