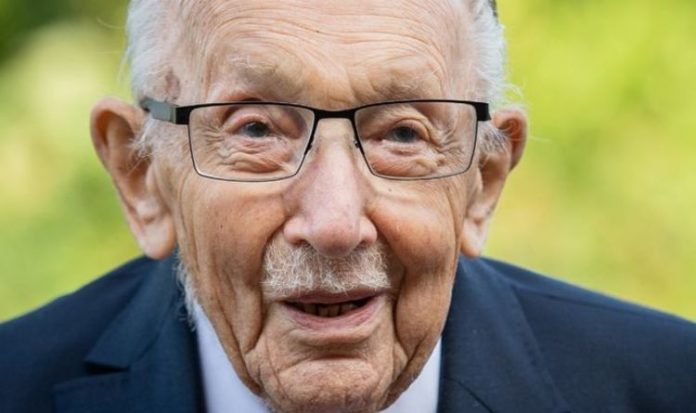 Captain Sir Tom Moore was taken to Bedford Hospital on Sunday after being treated for pneumonia for some time and testing positive for coronavirus last week. His daughters confirmed his death in a statement. Sir Tom’s fundraising efforts raised more than £32 million for the NHS, walking 100 laps of his garden before his 100th birthday during the first national lockdown in April.

Captain Tom said about the experience: “I never in my wildest dreams imagined I would be releasing a single with Michael Ball, but I also never thought it possible for me to walk in the garden and raise millions.

“So why not sing, spread some cheer and again – raise money for our national heroes.

The singer wrote on Twitter: “Rest in peace Captain Tom Moore. A wonderful life so well lived and a hero and fighter to the very end. So very very sad. Love and prayers for Hannah-I-M and all the family.”

Sir Tom’s family said in a statement: “It is with great sadness that we announce the death of our dear father, Captain Sir Tom Moore.

“We are so grateful that we were with him during the last hours of his life; Hannah, Benjie and Georgia by his bedside and Lucy on FaceTime. We spent hours chatting to him, reminiscing about our childhood and our wonderful mother. We shared laughter and tears together.

“The last year of our father’s life was nothing short of remarkable. He was rejuvenated and experienced things he’d only ever dreamed of.”